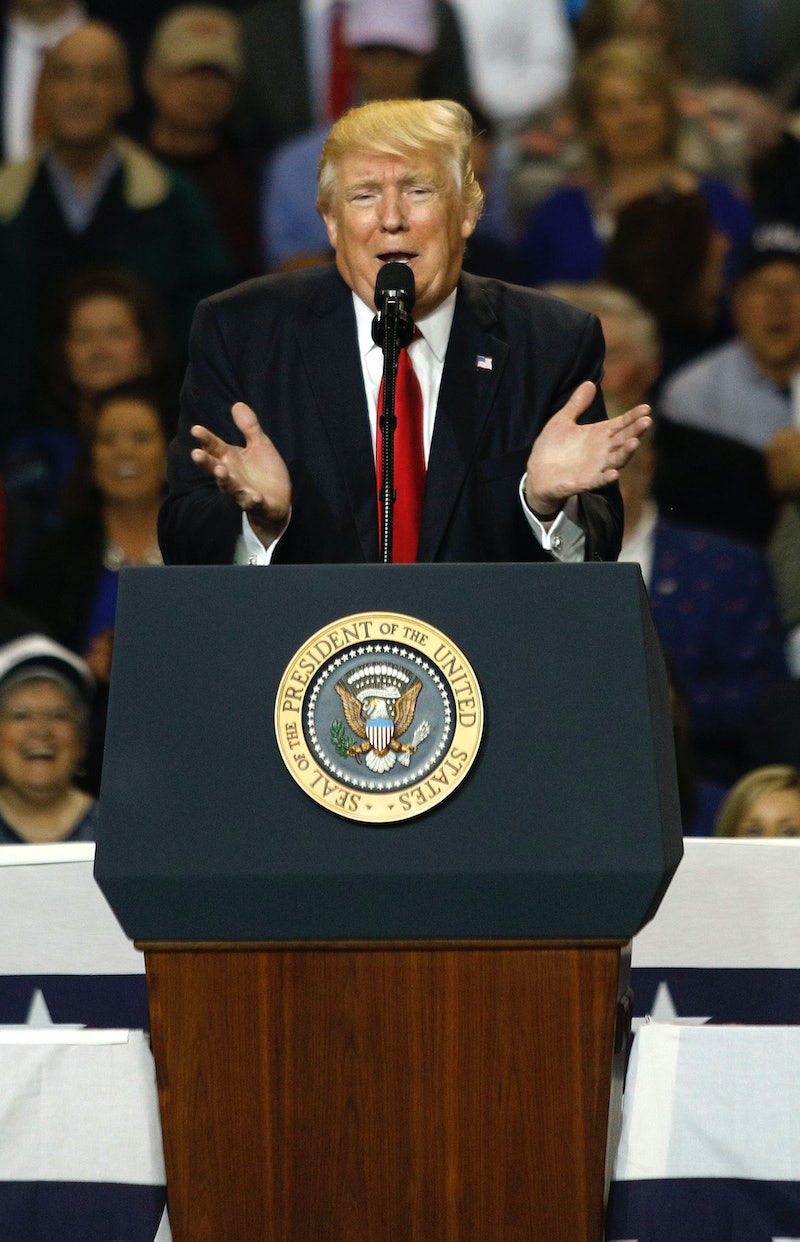 While political pundits will be parsing through the unexpected outcome and unprecedented nature of the 2016 election for years to come, there is a less-discussed aspect of Donald Trump's victory that makes this past presidential race especially unique: the role of conspiracy theories in politics. There are countless tactics politicians routinely use to cultivate a steady base of followers. However, Donald Trump used conspiracy theories, both explicitly and implicitly, to stoke his fan base in a way that was unparalleled for modern U.S. politics.

There was, perhaps most famously, the Obama birther theory, an alarmingly popular theory alleging Obama was born in Kenya (thus casting doubt on his presidential qualifications). It was over five years ago, during a 2011 guest appearance on The View, that Trump first publicly condoned the Obama birther conspiracy; he told hosts, "Why doesn’t he show his birth certificate? There’s something on that birth certificate he doesn’t like.”

His statements casting doubt on Obama's birth place continued up until September, just a couple months before Election Day, when Trump finally admitted Obama was born in the United States, while speaking at an event for veterans in Washington, D.C.

Even so, that certainly wasn't the only time Trump used unverified conspiracy theories in order to rile up his fan base or discredit political opponents. Remember when he stoked unfounded ties between the father of his primary opponent, Ted Cruz, and John F. Kennedy assassin, Lee Harvey Oswald? And during Trump's 100 days in office, his wiretapping allegation against the Obama administration has proved to be the ultimate distraction that lacks substantive evidence.

University of Miami political science professor and co-author of American Conspiracy Theories Joseph Uscinski speaks to Bustle about how Trump has been harnessing conspiracy theories as a form of disruptive politics for his own advantage.

"He’s trying to use conspiracy theories to set up a new political playing field, by saying that everything we know, everything we’ve been doing is wrong."

"Trump’s entire campaign was built on being an outsider, and he still wants to present himself as an outsider; he wants to drain the swamp; and change the game," says Uscinski, "He’s trying to use conspiracy theories to set up a new political playing field, by saying that everything we know, everything we’ve been doing is wrong."

Among Trump's core conspiracy rallying points, says Uscinski, is the "key theory that we’ve been bought out by foreign interests." Think of how Trump has so often blamed financial woes on China, or even infamously said that global warming was "created by and for the Chinese."

Associate professor of sociology at California State University Carl Stempel, who co-published Media Use, Social Structure, and Belief in 9/11 Conspiracy Theories, argues that part of the reason Trump's conspiracy theories have been politically successful is because they have also been strategically tolerated by his political peers who seek similar legislative aims.

"I think a lot of people at the Senate level are unwilling to marginalize Trump at the level that he deserves, and they’re unwilling to participate in his discrediting," Stempel tells Bustle. "He’s got a lot of people who have put faith in him to make changes, that they don’t believe other politicians would actually enact. They see him as the quintessential outsider."

Stempel says that a predisposition or tendency toward conspiratorial thinking is more likely to be adopted if people already politically align with the theory. Thus, from a sociological perspective, it makes sense for Trump supporters to entertain even his more outlandish theories because they already agree with his purported view of the world.

"It’s just more optimistic to think it’s conspiring people in one room who want to take your job away."

"I think people’s responses have to do with their political calculation. That fits the idea that the conspiracy thinking is somewhat normalized," says Stempel, "I really believe that the political structure and people’s perceptions of politics and politicians play into their willingness to go along with or look the other way [with conspiracy theories]."

However, there's another aspect to why conspiracy theories have worked for Trump; they can be a strong unifying force for the people — the voters — who buy into them.

Anita Waters, Denison University professor of black studies, sociology and anthropology, and author of the study Conspiracy Theories as Ethnosociologies: Explanation and Intention in African American Political Culture, tells Bustle that conspiracies give people something to cling to and bond over together. Thus, conspiracy theories become a useful device for Trump to cultivate his political fan base.

"I do think he’s being manipulative of his base of supporters. I think that’s how he became president," Waters says.

Moreover, when a conspiracy theory shifts the blame of a loss from larger outside forces (such as the shifting economy) onto a smaller conspired enemy (China, the Liberal Elite), there is a regained sense of hope and control, she explains.

"It’s almost like an optimistic idea," Waters says, adding that it's more comforting to believe "if you’re a steel worker without a job, that if only your political enemies' wills could be thwarted, then you would have a job and the economy would be different."

At the end of the day, conspiracy theories can provide a way to reject reality and find a new source to blame for your troubles, whether or not it's legitimate. And when a man running for the highest office in the land is encouraging you to buy into these theories, it is especially validating, explains Water. "It’s a harder pill to swallow when it’s the inexorable forces of the job industry that took your job away," Waters says. "It’s just more optimistic to think it’s conspiring people in one room who want to take your job away."