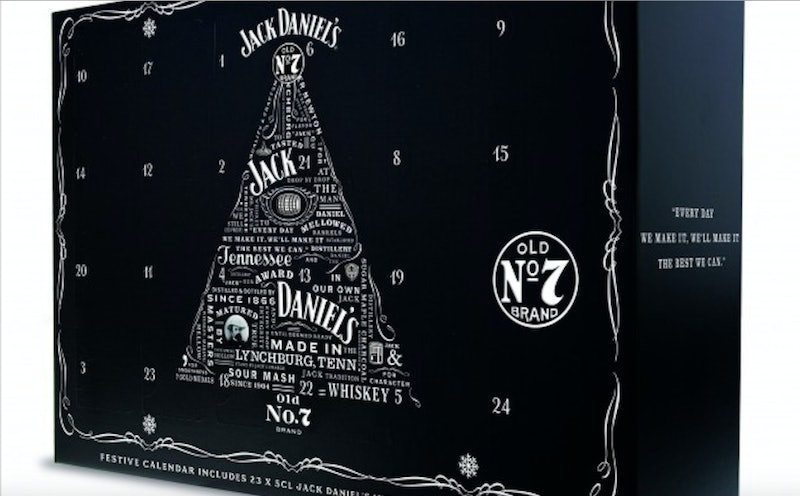 Excellent news for the whiskey lovers in the house: A Jack Daniel’s advent calendar full of teeny, tiny bottles of whiskey is hitting shelves this holiday season. There’s bad news, too, though, unfortunately — it’s only available in the UK. An exclusive at grocery store chain Asda and the UK Jack Daniel’s store, they’ll be yours to purchase starting in mid-November… as long as you’re in the right place. Sorry, U.S.-based Jack Daniel’s fans. You’ll have to sit this one out.

I won’t lie: At first, it seemed a little bizarre to me that the calendar is available in the UK, but not in the United States. Jack Daniel’s is, after all, an American brand; the distillery is in Lynchburg, Tenn., right where it’s been ever since Jasper Newton “Jack” Daniel, who learned the art of distilling from Nathan “Nearest” Green around 1850, opened it in the latter half of the 19th century. Jack Daniel’s is, however, one of the best-selling whiskeys in the world — and, in fact, was the best in 2017, according to The Spirits Business — so maybe it’s not that surprising that the calendar would make its debut internationally. The Spirits Business previously reported that in 2013, 60 percent of Jack Daniel’s sales were on the international market, rather than the domestic one; what’s more, in 2014, the brand “broke through the million-case barrier in Britain.”

There’s a pretty sizable market for Jack in the UK, is what I’m saying.

The seventh door, however — which, of course, is situated right at the top of the tree-shaped word cloud on the front of the calendar — contains a special little extra: Inside, there's “a distinctive 5cl Jack Daniel’s keyring hip flask,” which the product copy describes as “the perfect way to enjoy a sip of Jack on the go.” (It’s about the size of a standard alcohol miniature — the kind of thing you can usually expect to find in a hotel minibar.) Why is the flask in the seventh door, as opposed to the first or last door? Because of Old No. 7, of course — what you probably know as Jack Daniel’s Black Label. Old No. 7 is the original Jack Daniel’s whiskey.

There’s a bit of a mystery surrounding the number seven, by the way; no one is totally sure where it came from. In 2016, Master Distiller for No. 7 Jeff Arnett revealed that even he didn’t know what “No. 7” stood for. For what it’s worth, though, Jack Daniel biographer Peter Krass notes in his 2004 book Blood and Whiskey: The Life and Times of Jack Daniel that when Daniel first registered the distillery with the government, the number assigned to it was seven; however, when the district was redrawn, the distillery was assigned a new number: 16. Since Daniel had originally built his name on the number seven, though, he continued to call his whiskey Old No. 7.

Anyway, the Jack Daniel's advent calendar will be available for purchase at Asda and the UK Jack Daniel store starting on Nov. 19, according to Metro; it will cost £60, or around $78. (That comes out to £2.50 or $3.25 per bottle, including they keyring flask.) Bottoms up!