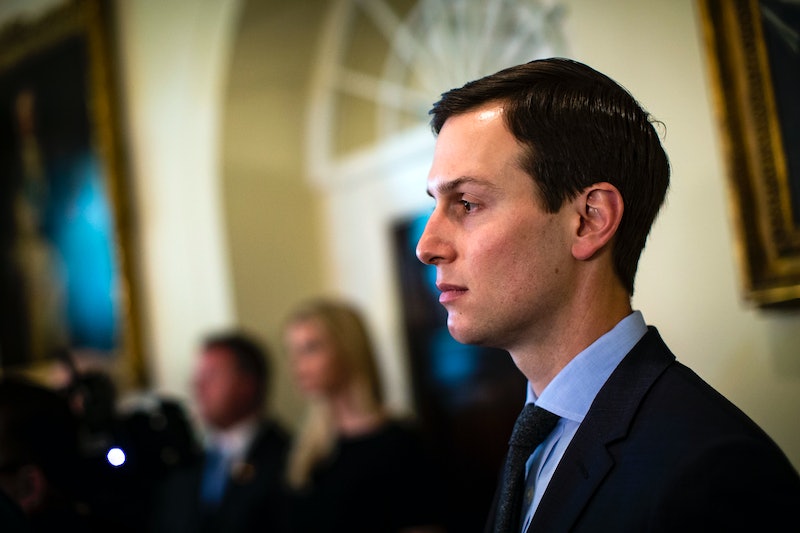 President Trump's son-in-law might have gotten himself in a bit of a bind. Thanks to Senate testimony that was released on Wednesday, The Daily Beast reported a new detail on Jared Kushner's Russia meeting in Trump Tower back in 2016. According to Rob Goldstein, who helped broker the infamous meeting between Kushner and Russian operative Natalia Veselnitskaya, Kushner was "infuriate[d]" and "agitated" that Veselnitskaya did not, as promised, provide incriminating information on Hillary Clinton during the meeting.

This is quite the contrast to what Kushner said publicly after word of the meeting leaked in July 2017. Then, in a statement to congressional committees, the president's son-in-law said that he arrived at the meeting late, was confused at the purpose once it started, and within ten minutes, found himself "looking for a polite way to leave and get back to my work." Kushner says that he soon texted an assistant asking for an excuse to get out of the meeting.

Kushner also suggested in his statement that he wasn't entirely sure why the sit-down was scheduled to begin with, and says he "thought nothing more of this short meeting" until it was reported in the press a year later.

"In June 2016, my brother-in-law, Donald Trump Jr. asked if I was free to stop by a meeting on June 9 at 3:00 p.m," Kushner said in 2017. "The campaign was headquartered in the same building as his office in Trump Tower, and it was common for each of us to swing by the other's meetings when requested. He eventually sent me his own email changing the time of the meeting to 4:00 p.m. That email was on top of a long back and forth that I did not read at the time."

The Trump Tower meeting, which was originally reported by the New York Times and later confirmed by Trump Jr., was originally proposed by Veselnitskaya, a Russian lawyer and informant for the Kremlin. Through Goldstein, Veselnitskaya offered to provide the Trump campaign with "information that would incriminate Hillary." Trump Jr., in emails that he himself later released, replied that "if it's what you say I love it," and agreed to take the meeting.

Trump Jr. and Kushner subsequently downplayed the significance of the meeting, claiming that Veselnitskaya spent most of the time talking about American sanctions on Russian officials. They've both characterized the sit-down as essentially an annoying but easily forgettable waste of time.

But Goldstein, who was also present at the meeting, tells a much different story. He testified on the matter in front of the Senate Judiciary Committee in December, and his testimony was released Wednesday. Goldstein told Senators that Kushner, far from being bored during the meeting, was furious that Veselnitskaya didn't deliver any incriminating information on Clinton

“After a few minutes of this labored presentation [on sanctions], Jared Kushner, who is sitting next to me, appeared somewhat agitated by this and said, I really have no idea what you're talking about. Could you please focus a bit more and maybe just start again?” Goldstone said of the meeting. “And I recall that [Veselnitskaya] began the presentation exactly where she had begun it last time, almost word for word, which seemed, by his body language, to infuriate [Kushner] even more.”

Goldstein also testified that Kushner "may have entered a minute or so" after the meeting started, but that to the best of his recollection, he remained there the entire time. There is some dispute over this, however: Both Trump Jr. and Veselnitskaya claimed that Kushner left early. Veselnitskaya added that she wasn't introduced to Kushner, and initially suspected that he was Trump Jr.'s younger brother.

More like this
Scotland's First Period Dignity Officer Has Sparked Backlash
By Darshita Goyal
A Political Thriller Inspired By The Munich Massacre Is Coming Soon
By Darshita Goyal
Why Eurovision 2023's Host City Won’t Be Revealed For A While Yet
By Sam Ramsden and Rachel Mantock
Lauv Is No Stranger To Taylor Swift, Drake, Ed Sheeran, & Fame
By Alyssa Lapid
Get Even More From Bustle — Sign Up For The Newsletter