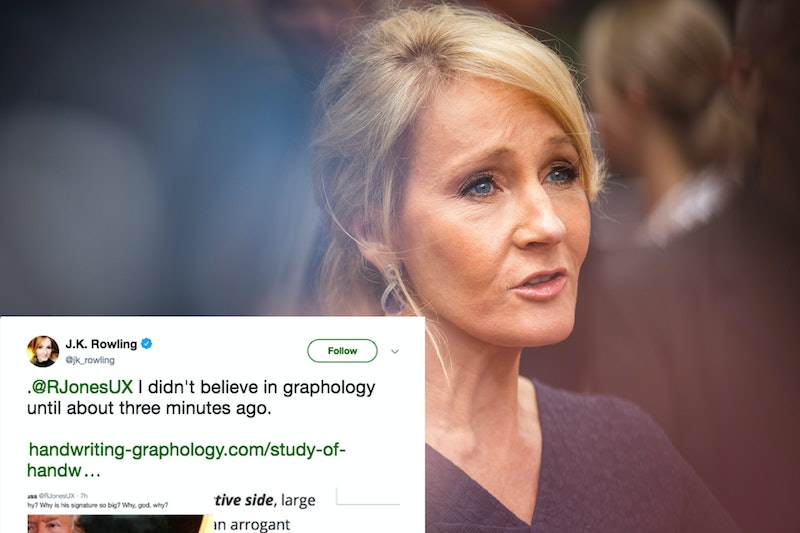 Sometimes a signature can tell you all you need to know about a person. British novelist J.K. Rowling tweeted about President Donald Trump's massive signature on Wednesday, sharing just what negative qualities handwriting analysts, or graphologists, attribute to individuals with large handwriting like Trump's.

"I didn't believe in graphology until about three minutes ago," Rowling tweeted Wednesday. The Harry Potter author shared a screenshot of another user's tweet that showed a photograph of Trump's massive signature and asked why it was "so big," along with a screenshot of text taken from a graphology website.

According to the excerpt, which Rowling attributed to Handwriting-graphology.com, the "negative" personality traits associated with large writing include "an arrogant person, conceited, haughty, who needs to exhibit compliments and recognitions, tyrant tendencies, exhibitionist and phony personality that may become megalomaniac with lack of critical sense." Sound familiar?

The text Rowling shared went on to state that "the insecurity and inferiority complex and lack of self-esteem may be compensated with a large writing." Handwriting-graphology.com also noted that "when the signature is larger than the text... it shows the individual has more ambitions than real possibilities."

Over the years, Trump's signature has been described as a "Richter Scale reading," "a lie detector test chart," "the EKG of a guest patient on ER," and "the sound wave of demons screaming." Slate's Katy Waldman once described it as "a cry for help." U.S. Secret Service Advanced Document Examination training program graduate and handwriting expert Michelle Dresbold told Politico that angles like the ones that dominate Trump's signature "show a writer who is feeling angry, determined, fearful, competitive, or challenged."

"When a script is completely devoid of curves, the writer lacks empathy and craves power, prestige and admiration," Politico reported Dresbold's analysis showed. "Besides the bigheadedness that shows in this script there is something else that is rather over-sized — the 'p' in 'Trump.' This large phallic symbol shouts, 'Me … big hunk of man.'"

Other graphologists have offered similar interpretations of Trump's signature. "His signature is this barbed-wire thing that's into power and control and rigidity," Sheila Lowe, a seasoned handwriting analyst, told the Boston Globe. "It's closed, it's not open, it's not soft at all."

"He's afraid of being seen," she told the Boston Globe.

Of course, there's been significant debate as to the accuracy of graphology with some calling it a "junk science." According to the Boston Globe, "dozens of studies" conducted by the end of the 20th century found that "although handwriting is unique to the individual, there is no demonstrable, predictive link between handwriting and personality traits." In courts of law, however, opinions over the credibility of graphology remain divided and studies continue to be carried out, according to the New York Times.

But perhaps the most interesting analysis of Trump's infamous signature would come from Trump himself. The man is, by his own admission, "a handwriting analyst" who has previously drawn connections between peoples' personalities and their handwriting in 140 characters or less on Twitter. Although, it's unclear what background or education Trump possess to support his claim of being a handwriting analyst, his interpretation of his own massive, sharp lined signature would likely be the greatest analysis of all the analysis done.

More like this
Michigan’s Governor Is “Going To Fight Like Hell” To Protect Abortion Access
By Andrea Zelinski
LGBT+ Men Fleeing Afghanistan Were Denied Asylum By The Home Office, New Findings Show
By Sam Ramsden
Cardi B Explains To David Letterman Why She Uses Her Star Power For Politics
By Jake Viswanath
What Is Barack Obama’s Net Worth? He Makes *Way* More Now As An Ex-President
By Hugh McIntyre
Get Even More From Bustle — Sign Up For The Newsletter