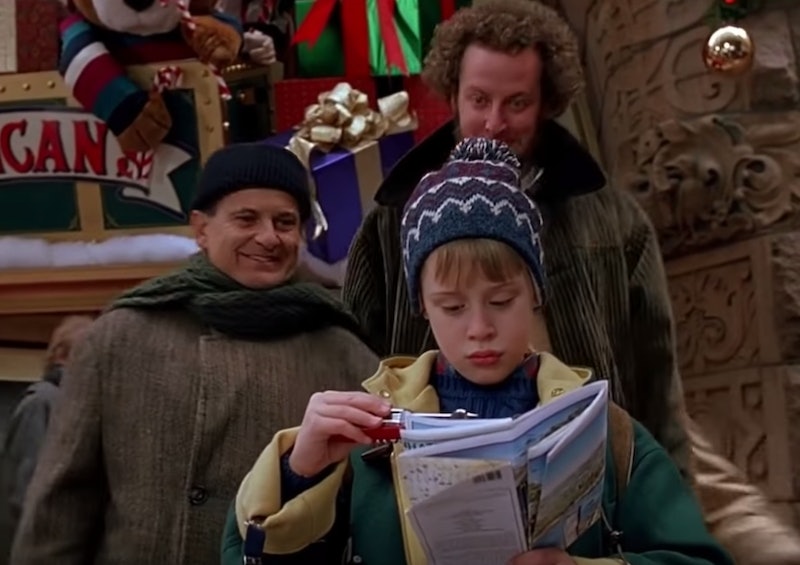 Home Alone is potentially one of the greatest Christmas films ever. But hey have you rewatched it as an adult? Y'all there is a lot of problematic stuff in that film, and I am not just talking bullying older brothers, child abandonment, and actual like grown men trying to basically kill a kid. Nope there is a lot more than that. And pretty hilariously, one particular legal expert has spilled the tea on the legalities of the situation and it's about bloody time. Yes you heard me, one barrister analysed every law broken in Home Alone 2, because, well, Twitter.

Hell yes, that is absolutely why Jesus invented the internet. A Twitter user called The Secret Barrister is responsible for these particular LOLs, and is behind the best selling book The Secret Barrister: Stories Of The Law And How It's Broken. So, they laid down some laws (pun) about how the whole thing would go down. Which are as follows

"This lecture explores the Christmas classic Home Alone 2 through the lens of English and Welsh Law. Contributions and observations are welcome but I'm perfectly prepared to tweet the film to a wall of embarrassed silence."

And so the magic began, and every anxious adult suspicion you had re the enormous amount of illegal behaviours in the film was confirmed.

OK, so Kevins parents go off on holiday, forgetting him. Wow, good work guys. Anyhow, straight off what we are all thinking — why didn't these people get charged?

OK so thats the obvious law breaking right there, but what about a few other little nuggets you might have missed. How about flipping voyeurism?

Next to acts of violence, harassment.

Right so leaving your child on the wrong plane. How does that go?

Uh oh and let's talk about selling fireworks to a child. That is not only effing stupid but damn illegal too y'all.

Right so the flipping thieves have broken out of jail. Seriously what are the odds? More importantly, what the hell is wrong with the police force in this film?

The next is a low key sick burn against the Donald himself, leader of the free world. Shudder as the four horsemen of the apocalypse casually ride in.

I guess because he is legally a minor he won't be charged but up next to add to the wrap sheet. lil Kev commits fraud.

Right those nasty old bandits are trying to rob a shop. Commercial robbery guys. That leads to prison. Also real talk why aren't the police more hard out after these guys.

And to make things worse, the wet bandits then go on to attempt to catch Kevin. Flipping child abduction WTF.

Right to make matters even more hectic, they have now succeeded in their attempted abduction and are fully fledged child abductors.

Now enter the Bird lady, who, using an archaic law can be charged with vagrancy. Great. Arresting people for being homeless. Nice one. However, what she probably should be arrested for is breaking into that theatre.

And next up, the vigilantism.

And the self defence argument seems a little futile when you think about how crazy his force is.

And once the police have finally caught up with the bandits they are definitely not reading their rights.

To sum it all up, the Secret Barrister decided to do a run down of all of the sentences that all of the involved would get.

So, the bandits will fare probably the worst.

Kevin is straight off to juvi.

And his parents will hopefully have their children taken off them.

So, as it really is the most wonderful time of the year, make sure you avoid breaking umpteen laws. Merry Christmas ya filthy animal.