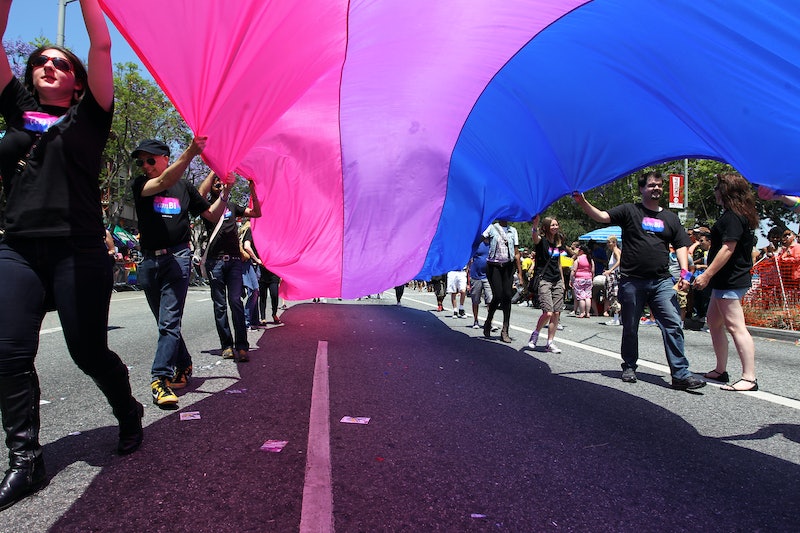 In late October, The New York Times reported on a government memo that revealed the Trump administration was considering legally establishing an immutable gender binary — and therefore erasing transgender individuals' preferred gender identities under the law. The administration has not exactly been a friend to the trans community, but this move would be unprecedented, and the memo was met with fierce outrage from the LGBTQ+, ally, and scientific communities. In fact, this letter against legally defining gender has gained over 1,600 scientists' signatures so far.

The Department of Health and Human Services (HHS) memo proposed creating unchangeable definitions of gender determined on a "biological basis that is clear, grounded in science, objective and administrable." Any dispute in a person's gender would be clarified using genetic testing, it said, according to The Times.

This perspective, according to the letter signed by hundreds of university professors, research scientists, and scholars, as well as eight Nobel Laureates from around the world, is "in no way 'grounded in science' as the administration claims." Apart from the fact that such genetic testing would violate the lived experiences of gender nonconforming individuals, they say, "the relationship between sex chromosomes, genitalia, and gender identity is complex," and on top of that, there are no tests to unambiguously identify gender, or even sex.

The letter also reiterated an obvious pushback to the administration's memo, which is that it fails to address the existence of intersex individuals — people born with a mix of male and female characteristics. Intersex people sometimes do not have sex chromosomes that align with the genetic definitions of male (XY) and female (XX), which would make the memo's simple directive to clarify gender via a genetic test both discriminatory, and a lot more complicated.

"The proposed policy will force many intersex people to be legally classified in ways that erase their intersex status and identity, as well as lead to more medically unnecessary and risky surgeries at birth," the letter says, referencing controversial surgeries parents sometimes opt for to supposedly "normalize" the genitalia of intersex babies. "Such non-consensual gender assignment and surgeries result in increased health risks in adulthood and violate intersex people’s right to self-determination."

This isn't the only high-profile letter written that speaks out against the memo. On Thursday, more than 50 companies including Apple, Amazon, Facebook, and Google released a joint statement arguing against "any administrative and legislative efforts to erase transgender protections through reinterpretation of existing laws and regulations."

Both letters recognized that while the scientific basis of defining gender is demonstrably unfounded, the larger issue is in removing legal protections for trans, intersex, and non-binary Americans. The HHS memo argued that the Obama administration had illegally chosen to include gender identity under the Title IX provision that protects discrimination on the basis of sex. Removing it could result in discrimination against gender nonconforming individuals in countless aspects of public life. That includes everything from medical treatments under Medicaid and fair employment opportunities, to what bathroom someone can use and equal treatment in schools.

"We ... ask our elected representatives to oppose its implementation, as it would cause grave harm to transgender and intersex Americans and weaken the constitutional rights of all Americans," scientists urged in their letter. "Transgender and intersex people deserve equal access to the rights, livelihoods, liberties, and dignity to which we are all entitled on the basis of our shared humanity."