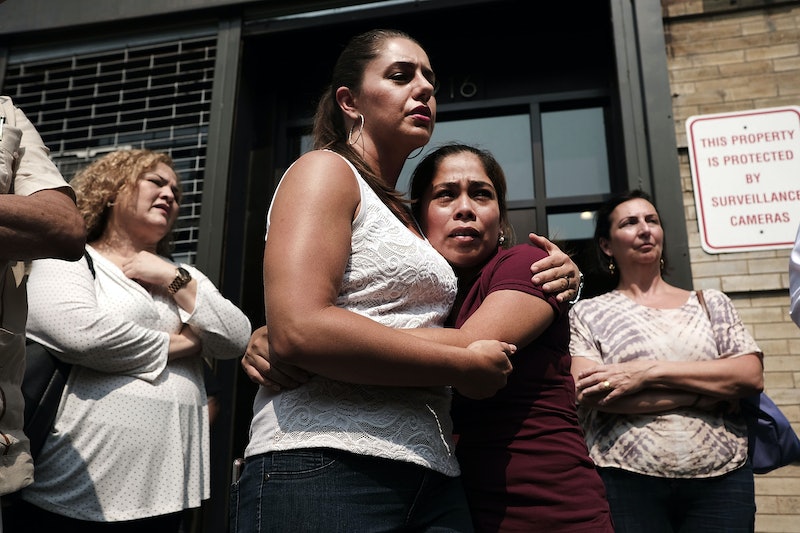 Since April, the Trump administration has kept numerous migrant children and parents separated from each other, causing trauma to both sides. In an effort to bring even more focus to this ongoing crisis, detained migrant parents wrote an open letter, asking for help on their children's behalf and explaining the situation that brought them to the American border.

"To the people of the United States, please help us. We are desperate parents," wrote a group of detainees at the Port Isabel Service Detention Center in Los Fresnos, Texas, CNN reported. They wrote the letter in Spanish, and CNN has translated it. The parents explained in the letter that they weren't criminals, and that they came to the U.S. with the goal of saving their lives and the lives of their children.

"We were not prepared for the nightmare that we faced here. The United States government kidnapped our children with tricks and didn't give us the opportunity to say goodbye," they wrote, according to CNN's translation.

While a district court judge has ordered the administration to reunite the children with their parents, the Independent reported that the process is going slowly and only with great difficulty. So far, they've only managed to reunite dozens of children — out of the approximately 2,000 who they separated from their parents when they arrived at the border.

"Each day is more painful that the last. Many of us have only had the chance to speak to our children once (this is very difficult because the social workers never answer)," the parents wrote. "The children cry, they don't recognize our voices and they feel abandoned and unloved. This makes us feel like we are dead."

In addition to being a heart-wrenching personal appeal, the open letter also offers an affirmation to the studies that have recently come out saying that the border separations will cause lasting trauma now and even later, once the families have been reunited. AZ Central reported that "the trauma, stress, and uncertainty of detainment" all create conditions that lead to lasting emotional trauma, which can affect the children in the form of poor mental health and behavioral issues throughout their lives.

The Public Research Institute came to a similar conclusion, writing that a pediatrician who visited one of the child detention centers surmised that the even short-term separations could lead to long-term trauma. The situations that these parents are describing in the letter, of course, are far more than just short-term separations.

Even while dealing with the trauma of being separated from and unable to reach their children, the parents' letter reminds readers that they still have other concerns to work through. "With all this trauma; the nightmares, anxiety and pain that this government has caused us and our children, we still have to fight for our asylum cases," they wrote.

The news focus moved away from the immigration crisis after Trump ended his own zero tolerance policy, which began the separations, and the judge ordered that the families be reunited. Now, though, this open letter is one of a number of more personal looks at the crisis coming out.

The LA Times, for example, reported on a Guatemalan father and his son who were reunited after two months, a piece that included a video of the moment when they were reunited. While the open letter speaks to how the parents are feeling while they don't have access to their children, the video shows exactly how the child reacts to seeing his father, and it's not the joyful reunion that you would expect. Instead, it's more evidence of trauma.

By writing an open letter, it's clear that these parents don't want readers to forget what's happening to them and their children.