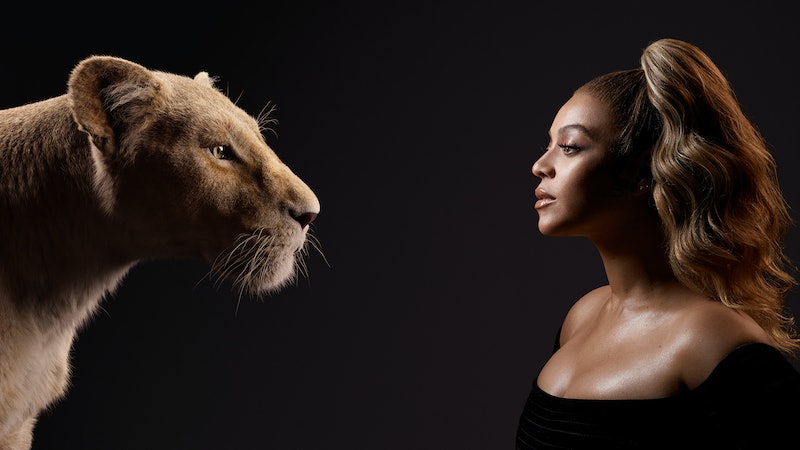 Summer's zooming by and before you know it, it will be July 19 and you'll be singing "Hakuna Matata" along with Billy Eichner's Timon and Seth Rogen's Pumbaa while watching Disney's live action The Lion King in theaters. As the premiere date approaches, the intrigue heightens, and possibly the most intriguing aspect of the live-action remake is what Beyoncé Knowles-Carter's lioness is like. A new Lion King featurette teases Beyoncé's Nala like you haven't seen her before, and gives fans a glimpse at what it was like to record the voices that make up the African animal kingdom.

Speaking of kingdoms, the clip that you see of Nala shows her telling Simba (Donald Glover) that he must return to his position at the top of Pride Rock. "You have to take your place as king," the Beyoncé-voiced prowler tells Simba. If Glover's Simba is the king, you can be sure that Beyoncé's character will step into her role as a queen pretty easily. For Queen Bey, it had to have come naturally.

Not only did voicing a royal character likely come easily for Beyoncé, but singing the iconic Lion King songs probably did too. The featurette doesn't reveal any new footage of her singing, but it does show how her (and other cast members') musical talents helped the story come to life.

Last month Disney announced that Pharrell Williams produced three songs from the new film's soundtrack, which Vulture reports includes “Can You Feel the Love Tonight?,” “I Just Can’t Wait to Be King,” and “Hakuna Matata." And based on this video, the vocal talents of Beyoncé and Glover aka Childish Gambino helped craft these re-interpreted songs.

Unfortunately, the featurette doesn't give any hints about the mystery new song written by Beyoncé and teased in the Lion King soundtrack listing. However, director Jon Favreau is quoted as saying, "These are real musicians bringing their creative voices to this," which could hint at the new melodies to come.

If the new Lion King featurette and photos released by Disney reveal anything about the new film, it's that this cast is packed with talent. You have to wonder what it's like to be among a cast that's filled with so many legends, including James Earl Jones, Chiwetel Ejiofor, and Alfre Woodard. And, thankfully, Keegan-Michael Key is here to tell you. Key, who plays the hyena Kamari, expressed his feelings about the incredible cast in the special video, saying, "I really admire the vast array of talent that's been assembled for this film. It's a privilege to be counted among these actors."

There's no denying that Disney's new Lion King cast is almost as impressive as the lions themselves. Or, in Beyoncé's case, even more so. And the featurette and new photos is just further proof that Simba may be king, but Beyoncé is the real royalty on this movie.

More like this
Everything You Need To Know About ‘Black Panther: Wakanda Forever’
By Bustle Editors and Radhika Menon
22 Movies On Netflix That Are Perfect For The Whole Family
By Bustle Editors
Jennifer Coolidge Needs 'Legally Blonde 3' To Happen So She Stops Getting Hot Dog Jokes
By Jake Viswanath
Before 'Bullet Train,' Revisit These Brad Pitt 'Fight Club' Premiere Photos From 1999
By Grace Wehniainen
Get Even More From Bustle — Sign Up For The Newsletter