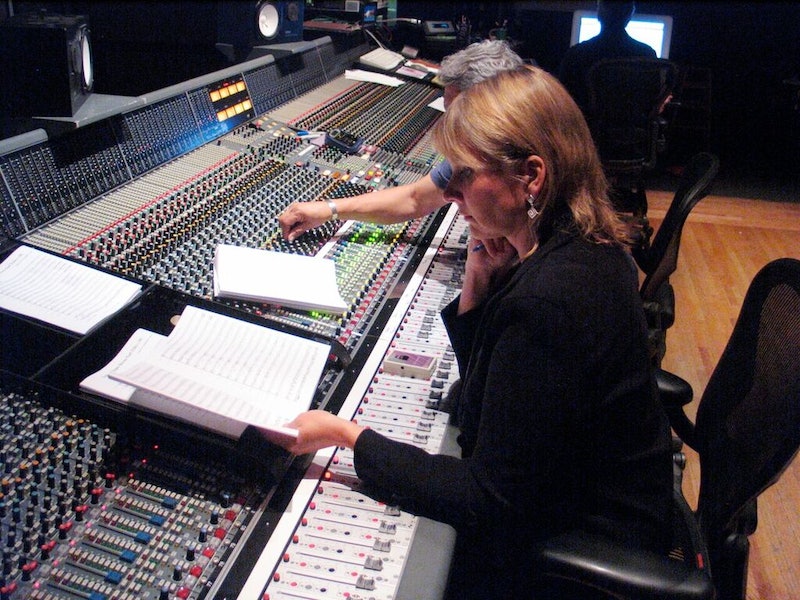 In 2016 women comprised seven percent of directors, 13 percent of writers, 17 percent of editors, 24 percent of producers, and five percent of cinematographers in the top 250 domestic grossing films of the year, according to the Celluloid report. These statistics are abysmal and appalling, but not entirely unexpected. Previous years haven't been any better for women, and sexism in the industry is now a widely-known reality. And yet there is one group of creatives that have it even worse: women film composers.

Only three percent of top grossing films in 2016 were scored by women. Three percent. And In 2015, it was just two percent.

With sexism a looming dark cloud over most female film creatives, composers have it the quantifiable worst. And according to Emmy-winning composer Laura Karpman, this startling statistic is something the industry is just now recognizing and understanding.

"What’s been a real challenge is institutional sexism in Hollywood. There are extraordinary challenges for everybody — but there are even higher challenges for women and people of color, and it's known. It barely warrants mentioning, except that we’ve got to fix it," she tells me over the phone.

Karpman, who has been writing music since she was seven years old, ("when dinosaurs roamed the earth," she jokes), admits that she has experienced sexism in the industry "many times" herself, and that she's trying to understand why women composers are especially scarce in Hollywood.

She suggests it could be the pay difference — with women getting paid less on the dollar than men, they have less resources to spend on publicists and other ways to promote themselves.

"It’s obvious we’re not getting the top studio films — people with the highest visibility in our business are doing that. I also think we haven’t been able to be exposed as role models, so I think it makes it harder for younger women to know that this exists. I think the fact that there are many, many, many panels without women on them give women the tacit message that we don’t exist."

It wasn't until 2013 when Dr. Martha Lauzen, who conducts yearly studies of women in Hollywood, included composers in her numbers, did Karpman realize how heartbreaking the figures really were. "For the first time we saw how low our numbers were," she says. "Numbers don’t whine, they don’t complain, they just exist. So we were able to have a substantial tool in our arsenal.”

Karpman, along with fellow award-winning composers Miriam Cutler and Lolita Ritmanis, founded the Alliance for Women Film Composers, an organization that aims to offer support and create tangible change for women in the male-driven industry.

"We all would like to be in a post-racial, post-sexist world. Nobody wants to even talk about this. We wish we didn’t have to," Karpman says.

Ritmanis, whose orchestration credits include the Kevin Costner Robin Hood iteration and the Lethal Weapon series, took over as president of the organization in November of 2016, but she learned of sexism in the industry when she was just starting out in her career.

Mentored by the great composer Shirley Walker, Ritmanis witnessed the way her mentor was treated. "Shirley scored some really phenomenal films, and I thought, 'Why isn’t she being offered big box office films?' All of those were offered to men. I saw man after man race past her — many that did not have the same talent and vision that she did — but it seemed to be a boys' club and the girls weren’t invited to the party."

And in 2017, the party is still severely lacking women. The Academy Awards has given awards for music for 82 years now, yet only five women have been nominated in scoring categories.

"There was such an uproar about last year’s Oscars and the lack of women and people of color," says Ritmanis. "Laura Karpman is now a music governor in the Academy of Motion Picture Arts and Sciences. Having her be there and be such a strong, powerful, and wise member of that group... she was able to sign up several more women composers in the Academy of Motion Pictures."

Carly Paradis, another award-winning TV and film composer now located in the UK, combats the negative effects of sexism by making an effort to surround herself with women musicians. "I’ve tried to make a circle of friends that are female in the music industry, whether they are violinists or guitar players or composers," she says.

She's also mentoring a young woman looking to break in. "I’m definitely open to sharing my experiences and helping others to do this as a career. Women have their own voice, their own perspective. There are so many amazing and creative women out there who have incredible courage. [Their work] needs to be shared with the world."

The AWFC is also taking steps towards exposing women with real talent to Hollywood. "The idea behind the alliance is to make people who are invisible more visible," Karpman stresses. "We are adamant about getting women on panels. That sounds like a small thing, but it’s a huge thing. And our last brunch, the Alliance brunch at Sundance, I asked male composers to take a pledge that they wouldn’t serve on a panel without a woman or a person of color on that panel. We continue to form a community, which is almost the most important thing that we have going."

It's obvious the industry rewards men more than women, and because of this, Karpman, Ritmanis, and Paradis agree that a thick skin is necessary to be successful as a woman in this field. That being said, they encourage women who are serious about film and TV scoring to step up to the plate — foreseeable hardships and all.

"It’s a very tough business. You have to be able to put your emotions on the back burner," Ritmanis says. "But why shouldn’t there be more women? There really is room for everyone. Let women have a seat at the table."

Though we now know how dismal it was for women in years past, it bears repeating: In 2015 women scored two percent of the top 250 grossing films. In 2016 it was three percent, and at this rate, women won't be representing half of the top grossing films until 2064. It's a horrifying prospect, and Karpman agrees. "I refuse to be having this conversation in 50 years," she concludes. "I refuse."

And perhaps with her determined attitude, along with Ritmanis, Paradis, and other woman fighting for equality in this complicated workplace, we won't have to.