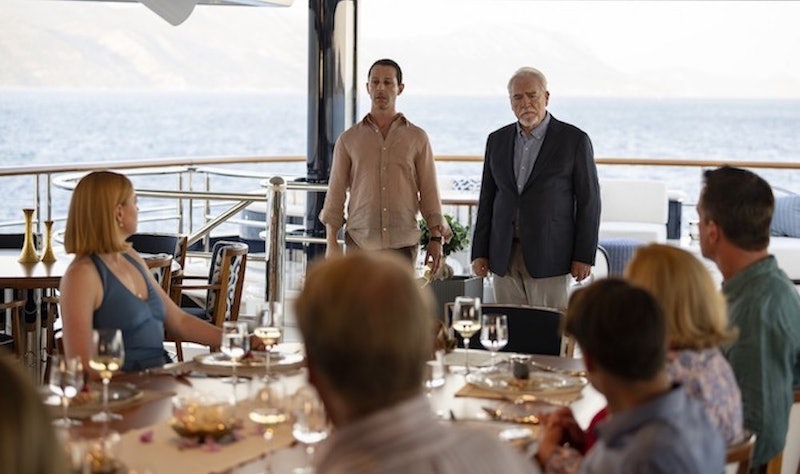 Someone needed to be sacrificed in order to finally put the cruise ship scandal to rest on Succession. And while it initially looked as though Kendall was ready to take the hit for the team, he ended up doing the one thing he's attempted (and failed) to do so many times before: double-cross his dear old dad. But, this Logan Succession Season 2 finale theory hints that he might not be taking the fall for everything unwittingly.

All season long, Kendall has served as Logan's right-hand man, allowing himself to be used for whatever means his dad felt necessary. But by the end of the finale, "This Is Not for Tears," that dynamic had completely changed. Towards the end of the episode, just before Kendall left to throw himself under the metaphorical bus, he asked his father a question that has obviously plagued him for quite some time: “Did you ever think I could do it?” He's referring to his capabilities of running Waystar. But, even when his son is on the brink of sacrificing everything for his family, Logan couldn't offer any words of encouragement. “You’re not a killer," Logan told Kendall. "You have to be a killer.”

So when Kendall sat down for the press conference and called his dad a “malignant presence, a bully and a liar” who knew full well of the wrongdoing taking place on his cruise ships, he proved just how much of a killer he really is, at long last.

Or did he? Some fans are already starting to theorize about the Succession Season 2 finale and wonder if there's more to this story than meets the eye, suggesting that Logan himself came up with the idea to have Kendall take him down.

On the one hand, it's entirely possible that Kendall is the mastermind of this entire plan, tired of serving as his dad's emotional punching bag time and time again. But the expression on Logan's face at the end of the hour — which carried with it a faint look of pride — left some viewers mulling over the possibility that Logan intended for this to happen all along. "Logan HAD to know Kendall was gonna do that," wrote @chilltowntv. "My take: he knew the shareholders were gonna vote him out so he had Ken make the statement, then they work together behind the scenes."

Logan knew that the shareholders wanted him out, which means he may have suspected his days were numbered, regardless of who else he tried to blame. Some believe that Logan and Kendall were in on the plan together and figured making it all look like Kendall's idea would set him up as the ideal successor. However, others think Kendall was once again used as his father's puppet and that Logan purposefully pushed Kendall to the point of betraying him, thereby making him worthy of taking over the company.

Thankfully, Succession has already been picked up for a third season, so fans will be given answers to what really happened before the explosive press conference eventually. If Kendall and Logan were working together, it's possible he'll be taking the role of a silent partner. But, if Kendall did really betray his father, Logan could decide to retaliate in a big way — don't forget, he knows about Kendall's involvement in the accidental death of that waiter.

Either way, it's not looking good for the Roy patriarch, and depending upon how everything shakes out (perhaps even with Logan's arrest), those family get togethers are about to get even more stressful.

More like this
Everything To Know About 'Evil' Season 4
By Meguire Hennes
Meet The New Team Of Residents Joining 'Grey's Anatomy' In Season 19
By Brad Witter and Sophia Moore
'The Sandman’s Ending Is A Departure From Neil Gaiman’s Comic Book Series
By Kadin Burnett
The 'PLL: Original Sin' Creators Say A’s Identity Will Be “Very Clear” By The Season Finale
By Alyssa Lapid
Get Even More From Bustle — Sign Up For The Newsletter