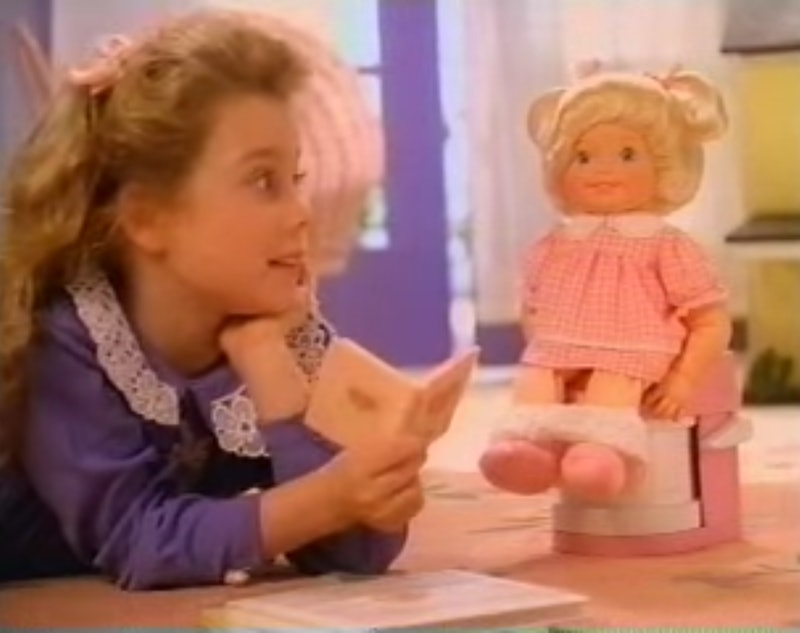 Do you ever wake up in the middle of the night, drenched cold sweat, suddenly overcome with pangs of pure embarrassment from something so stupid you did, like, 20 years ago? Something that probably, hopefully, nobody remembers except you? That’s what I image happens nightly to whoever created this Magic Potty Baby doll commercial from the ‘90s. But oh, we remember. For once you watch the Magic Potty Baby commercial, it will never leave you.

If you’ve never heard of Magic Potty Baby, I’m sure you have some questions. Like, “Why?” and “What?” and “Did you say magic potty?” and also “What?” Released by Tyco in 1992, Magic Potty Baby is a toy doll that, as the name suggests, uses the potty. The doll comes with a tiny bottle (for feeding!) and a tiny toilet (for pottying!) and, I’m guessing, the itty bitty final shreds of sanity of whoever’s idea this was.

Let’s talk about the toilet, the true star of the show. As demonstrated in the commercial, the toilet isn’t merely a plastic prop; It is a throne upon which Magic Potty Baby does her magic potty business. When you set Magic Potty Baby on the toilet’s seat, a slightly hesitant stream of yellow liquid falls into a sealed chamber. The chamber is see-through so you can watch the liquid fill up. (Kids don’t want the illusion of pee. They want to see the actual pee!) Then, you can flush the handle to empty the chamber, activating the toilet’s realistic flushing sound. (Kids gotta have that realistic toilet sound! It’s what’s gonna sell them on the fake magic pee pee doll!)

Where does the magic come in? I guess during the part where there’s “no water, no mess,” as the commercial states. That would certainly be magic if you didn’t already assume a baby doll shouldn’t come with wet, yellow water-stained clothing. Perhaps the magic is in the fact that this toy even exists, a true miracle in itself.

The product in its entirety is, in a word, baffling. (Who asked for this? Why did anyone say “yeah okay sure”?) Things get ever more confusing when you start to think about the mechanics of creating such a toy, specifically that magic toilet. Here is a list of just some of the things someone(s) definitely had to think about when designing the toilet:

Magic Potty Baby descends from a line of pants-pissing baby dolls. Betsy Wetsy, a 1937 doll that wet her pants, is likely the most infamous. She’s likely the reason Magic Potty Baby is touted repeated as being “no water, no mess.” As Mental Floss reports, Betsy Wetsy caused a lot of soggy diaper messes for parents to deal with. She’s also the reason we all know that you can’t patent urination. (Creators of a previous, pee pee-making doll Dy-Dee tried to sue the creators of Betsy Wetsy for infringement but lost.)

While the cultural stamina of Magic Potty Baby hasn’t necessarily been a steady stream, she is name dropped in this 2012 song by rapper Lil Ugly Mane, ‘Magic Potty Baby Bitch.’ Though the song certainly speaks to her Magic Baby street cred, I don’t think it’s quite as much of a bop as the actual commercial jingle.

However, I do think we can all agree it's high-time for another iteration of this nostalgic treasure. Yes, we, as a culture, are ready for Magic Pooping Baby. Until then, you can buy your very own Magic Potty Baby on eBay for $50.

More like this
TikTok’s “Miley Stewart Summer” Trend Will Make You So Nostalgic
By Courtney Young
8 TikTok Pasta Recipes To Try Out At Home
By Emma Garza
TikTok’s “5-9 Routine” Trend Is Here To Boost Your Productivity
By Courtney Young
What Is "The Ick?" The TikTok Dating Term, Explained
By Courtney Young
Get Even More From Bustle — Sign Up For The Newsletter