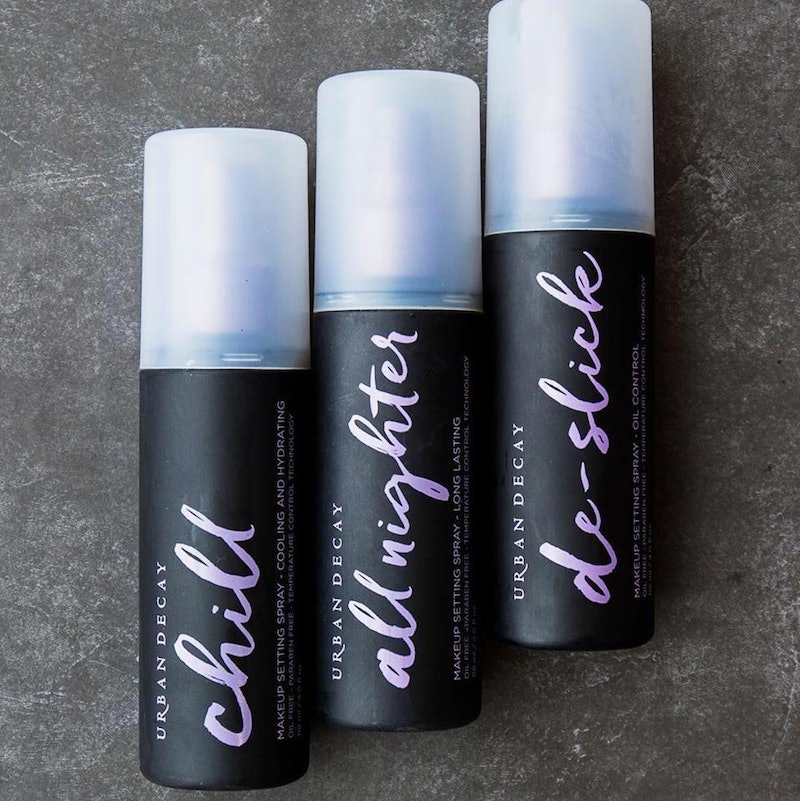 Full disclosure: I previously labored under the illusion that makeup setting sprays were a gimmick. I wryly thought, "Why would you spritz water marketed as product on dry, carefully applied makeup? Wouldn't that make... a mess?" But when Urban Decay repackaged their Makeup Setting Sprays, which are said to combat oil, to cool skin, and to help makeup stay put, in soft touch black bottles, I had a major epiphany. I am using Urban Decay Makeup Setting Sprays in a hack capacity that's different from which they are mainly intended.

So the hack is UD-approved.

I had received samples of the sprays and used them with shadow brushes. It's the same concept as a beautyblender — you wet it and use while damp for better control and coverage.

The Setting Sprays are now a fully incorporated and irreplaceable part of my a.m. routine. I blast my makeup brushes generously with two to three full spritzes of the sprays, taking care not to soak them.

The moistness of the brush seriously lessens eyeshadow fallout on my cheeks, since you pack the brush with product.

Basically, the shadow sticks to the wet brush even more. The moistened shadows apply more smoothly, too. The wet bristles also intensify color.

I noticed that the brown and black matte shadows in my Urban Decay NAKED Ultimate Basics Palette and in my Kat Von D Shade & Light Eye Contour Palette came to life when applied with a dampened brush.

Every claim that UD made in the press fact sheet rang true IRL.

I worried that tapping a wet brush into a dry pan of shadow might ruin or destroy the integrity of the remaining product in the pan or make an icky, mingled mess. But it didn't. The shadow still applies perfectly, be it wet or dry.

I seriously do not remember how I applied eyeshadow before. These setting sprays have been a gamechanger for me.

I created this smoky look with my new setting spray technique.

Some UD fans have been asking in Insta comments if the newly packaged sprays boast a new formula. But because Beauty Junkies love the existing iteration, it's not being tinkered with. I'm glad I finally "get" the devotion to this product and have become a member of the club.

I also spritz my face in an "X" formation twice with a UD Setting Spray and then I'm dunzo. It's a nice cooling blast, isn't sticky or tight, and doesn't make a runny mess. Along with a primer, it's my eyeshadows' new BFF.