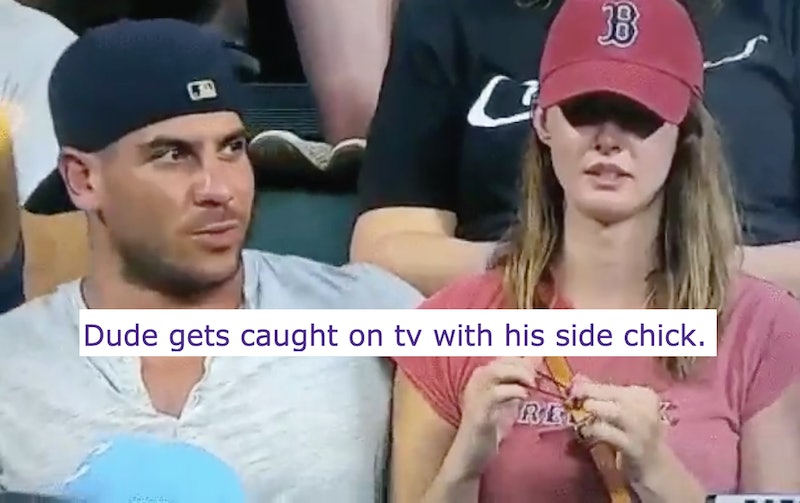 I don't mean to alarm you, but it seems the internet isn't always a bastion of objectivity and fact-checking. Shocking, I know! One of the latest falsehoods to spread through the noisy halls of cyberspace is a GIF of a man supposedly caught on camera with his "side chick," (a term that makes me want to soak my soul in Clorox).

The pair were caught on the Jumbotron at a Red Sox game, and the man appears to nervously remove his arm from around his partner's shoulder when he notices they're being filmed. "Definitive proof that he is in a monogamous relationship with another woman and that he is kissing this lady behind her back!" said the internet. An astute observation except that, as it turns out, the woman is not his "side chick" (vomit); she's his wife.

Shortly after the GIF went viral and landed on Reddit's front page, a Reddit user commented on the thread saying he was the man's cousin, and the pair is in fact married. He added in an edit:

"We think it was just a bad play by Sox

Cause we were having fun the whole night

No idea otherwise tho, we definitely didn't know we were on tv and I don't think we were on the Jumbotron although it was behind us"

"This is me, the wife and I had no idea we were on TV. Can't remember whats happening here although we had a 10/10 date night. Guess my arm needed to go though haha."

The angry mobs of Reddit, quick to condemn the man for his supposed infidelity, were just as quick to turn their misdirected ire on themselves.

"Kind of disturbing how much reddit enjoys a witchhunt," one user commented.

"Yep. Like not even joking. But this thread is legit unsettling. The fact that OP just puts a title on a 3 second clip and the majority believe him and literally question anyone who thinks it could be anything other than this one scenario," said another.

Truly unsettling, but at least in this case everything worked out. If only people who unquestioningly jumped on blame bandwagons without any knowledge or information only existed in the threads of Reddit and didn't, say, get elected to public office.