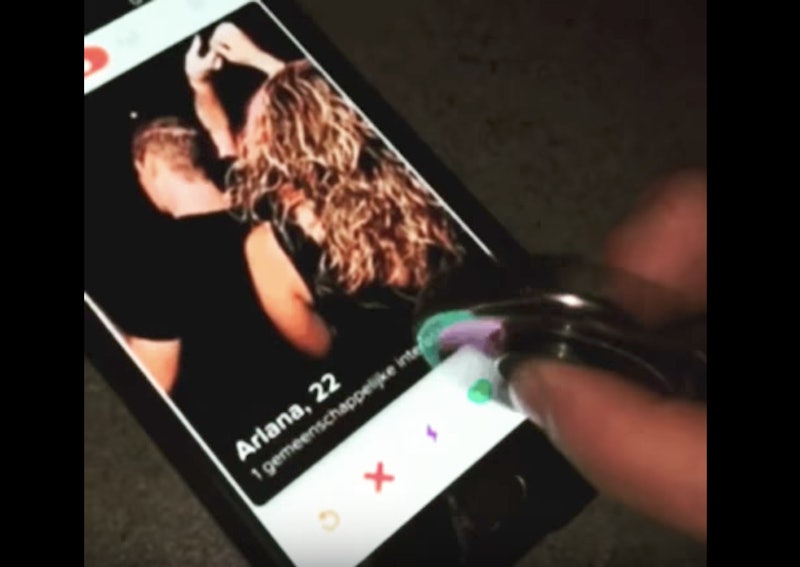 Sometimes in order to meet someone special online you have to cast your net pretty wide, and now thanks to one man's brilliant solution, you can do it in a fraction of the time. Swiping right doesn't have to be repetitive or time consuming with the fidget spinner Tinder hack, which takes a common stress-relieving toy and turns it into a Tindering machine. If only the fidget spinner could write messages and go on first dates too — now that would really help minimize people's anxiety.

The mastermind behind the ingenious trick is Holden Ellis, a 22-year old musician from Virginia. Holden was chewing on his fidget spinner while playing around on Tinder when he noticed the spinning fan-like toy was covered in a type of silicone material, similar to the tip of a stylus pen. Silicone can be formulated to be insulative or conductive, so Holden decided to try placing the fidget spinner on his phone screen and — lo and behold — it worked!

Holden quickly recorded a video of the spinner cycling through matches when placed on Tinder's "like" button, and uploaded it to YouTube on May 22, gifting the world with yet another useful Tinder hack.

Who would he recommend this hack to? "Everyone in the world!" Holden tells Bustle in an interview. "It's an easy solution if you just want to like everyone and get a match quickly!"

There are plenty of tricks out there for people who want to game the system, from picking the perfect stylized picture to writing a tight bio, but for many, increasing chances of finding the right person boil down to a numbers game. Recent research shows that men are more likely to swipe right on most profiles, while women tend to be more discerning on Tinder. This is in part why men have a lower match-rate than their fellow female users; but once they do, men are far less likely to send a message. A good swipe-game doesn't count if you have a bad follow through.

There are plenty of companion apps out there that can improve your swipes per minute, such as the auto-liker Tinderly Bondfire, but instead of installing yet another thing on your phone, the free fidget spinner hack can aid your romantic success while freeing up some precious storage space.

The popularity of fidget spinners has soared throughout 2017, and if nothing else, this hack shows the versatility of the toy. Some claim that the simple device can help with focus, and have a number of health benefits ranging from easing stress and anxiety, to helping with post-traumatic stress disorder (PTSD) and attention deficit hyperactivity disorder (ADHD). While concrete research is yet to prove these claims, Holden highly recommends the toy to anyone dealing with these issues. "I love them," he tells Bustle. "They help [with] stress in every possible way. Some people say they are for people with autism and ADHD, and I approve because I have those symptoms as well!"

So has Holden been able to find love with this new Tinder hack? "Surprisingly no. I haven't had a match on Tinder in ages," he tells Bustle. "Probably the reason I was using a fidget spinner."