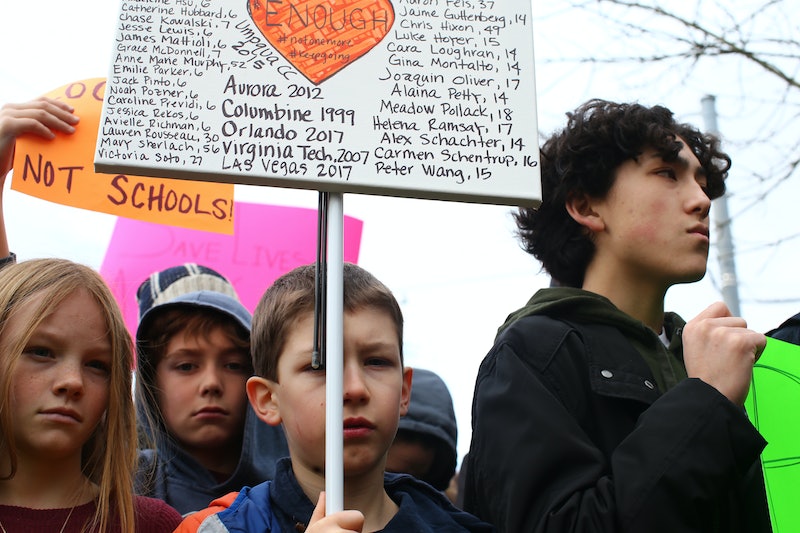 The March for Our Lives has seen so many simultaneous marches pop up on its site that their march map is now epic. There are 817 events worldwide planned for Saturday, and so many are in the United States that the March for Our Lives map showing events near you is blanketed with red pins. The odds are you're not far from one of the gun control marches and protests.

The original march was conceived of and is being executed by surviving students from Marjory Stoneman Douglas high school in Parkland, Florida, where the school shooting occurred on Valentine's Day. They planned to head to Washington, D.C., and invited activists across the country and world to join them in solidarity. And it seems like plenty heard their call.

The map allows you to search for the closest events to you using a ZIP code or city name. Even searches in rural Iowa offer several options that are within an hour's drive.

If you click on one of the events, it gives you the address and start time. It also explains exactly what the local march will consist of. Some are more stationary protests with speakers, others include voter registration drives. Each one is different, as organized by the local organizers. You can click on RSVP to let them know you're coming. That also ensures you get updated with the latest information.

The biggest march will likely be the one in Washington, D.C. Organizers have estimated that as many as 500,000 people could attend, driving, busing, and flying in from all over the East Coast and beyond. The march there will start on the Mall and then head down Pennsylvania Avenue. There aren't any adults scheduled to speak — only students who are affected by the issue.

That turnout estimate of 500,000 could be low, given the success of the recent school walkout. About 3,000 schools took part, sending a clear signal that there are young people across the country dedicated to pushing for change on this issue.

Officials are prepared for the event in D.C. to be larger than the Women's March in 2017. That was the second busiest day in history for the region's transit agencies. Nearly half a million were thought to have attended.

You can find detailed information on the D.C. march online. They show where to be and when, what to bring, what to leave at home, and more. If you're thinking of attending, don't miss the FAQ. It answers just about every question under the sun and even explains how you can volunteer to help.

The planners have raised the vast majority of their $3.8 million goal on their GoFundMe. Half the money raised will go to the march. Famous donors include Oprah Winfrey and George Clooney.

Organizer Cameron Kasky, a Stoneman Douglas student, created the GoFundMe. "The funds will be spent on the incredibly difficult and expensive process that is organizing a march like this," Kasky wrote. "We have people making more specific plans, but for now know that this is for the march and everything left over will be going to the victims' funds." Ultimately about half of the money is expected to go to victims via the Broward Education Foundation.

The fundraising for the local marches depends on who has done the organization.

Kasky has been active on Twitter even as the final details come together. "Seeing people all over the world prepare their signs for the marches, setting up their transportation (checkout what @lyft is doing) & getting their friends and families involved brings a tear to my eye," Kasky wrote. "This is a time of beautiful, beautiful unity. Be proud."

No matter which corner of the country you're in, you can be part of that unity on Saturday.

More like this
Scotland's First Period Dignity Officer Has Sparked Backlash
By Darshita Goyal
'The Capture' Is Finally Back – & S2 Looks Tense AF
By Sophie McEvoy and El Hunt
Ben & Jerry’s & Tony’s Chocolonely Are Launching 4 Responsible New Flavours
By Sophie McEvoy
25 Things I've Reduced My Life To, In Addition To WFH In My PJs
By Ginny Hogan
Get Even More From Bustle — Sign Up For The Newsletter