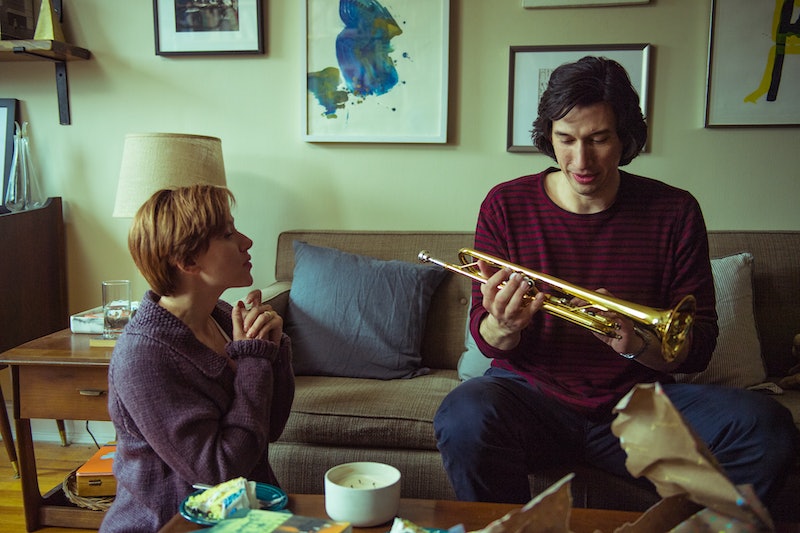 Merritt Wever stans, our time has come. After a star-making performance in Netflix's Unbelievable, the actor is gearing up for her next gig starring alongside Adam Driver and Scarlett Johansson. And though she doesn't appear much in this new Marriage Story trailer, the short clip of seeing her holding a glass of wine like it's a part of her arm is worth it.

There's always two sides to every story, and Netflix's Marriage Story aims to tell both sides of a slowly crumbling marriage — or the truth in between. Driver stars as Charlie, a successful New York theater director, with Johansson portraying his soon-to-be former wife Nicole, an actor who left LA to star in Charlie's plays, but wants to return home with their son after landing a new TV gig. Netflix's official plot synopsis describes the film as "an incisive and compassionate portrait of a marriage breaking up and a family staying together."

The new trailer gives viewers a peek at what that portrait entails, from intense arguments in attorney's offices to more tender moments, including a hilariously joyful reunion between mother- and son-in-law. It also teases an impressive supporting cast, including Laura Dern, Ray Liotta, Alan Alda, Julie Hagerty, and Wallace Shawn. And, most importantly, finally gives the fans the Wever content they deserve.

According to writer-director Noah Baumbach, Wever's character, Nicole's sister Cassie, brings a lot of comedic energy to the film — see: her wine glass. Speaking with Deadline about the scene in which Nicole and Cassie talk about how to serve Charlie with divorce papers, as glimpsed in the trailer, Baumbach said he approached it as a "screwball comedy." Though he also saw it as a suspense scene. "The envelope in that scene is either a kind of comic trope, or it's a thriller," he said. "It's a bomb hidden under the desk, which you're waiting to see if it's going to go off or not."

Although the film doesn't hit theaters until November 6, with the Netflix premiere date scheduled for December 6, Marriage Story has already garnered major Oscar buzz after being featured at the Toronto International Film Festival in September. Critics have called both Johansson's and Driver's performances the best of their careers, with some even calling Dern an Oscar contender for her fierce role.

More like this
Jurnee Smollett’s Heart Is Healing
By Rebecca Carroll
Everything You Need To Know About The 'Knives Out' Sequel
By Grace Wehniainen
What’s New On Netflix: 'Stranger Things' & 'Mean Girls'
By Arya Roshanian
Anya Taylor-Joy Might Be Engaged To Her Musician Beau
By Jack Irvin and Sophie McEvoy
Get Even More From Bustle — Sign Up For The Newsletter