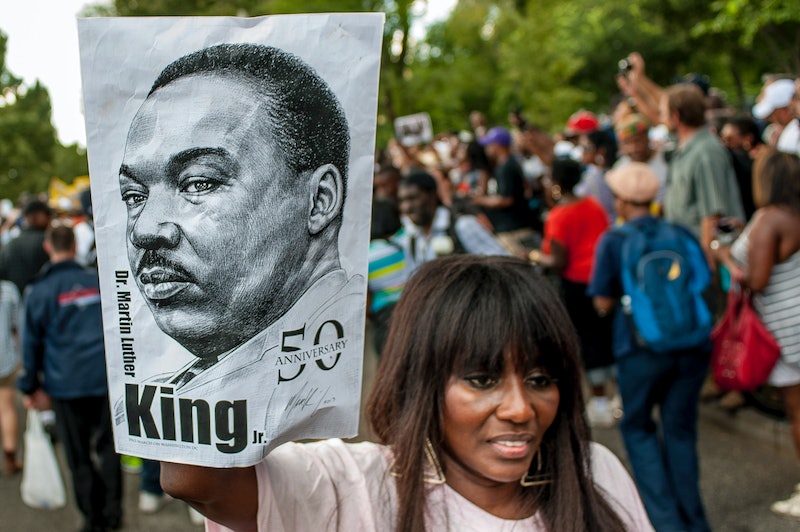 Monday marks Martin Luther King Jr. Day, which is one of the only three American national holidays celebrated in honor of certain political figures. (The other two commemorate Christopher Columbus and George Washington.) Every year in the United States of America since 1986, this day celebrates the political rigor, contribution, and sacrifice of the civil rights phenomenon, King, who demanded racial equality for African Americans in the country. And in modern history, on every Jan. 15, his quotes get circulated on social media. But today one MLK quote on white moderates is being quoted a whole lot on Twitter.

King shared these words on white moderates in a powerful letter he sent while he was in Alabama's Birmingham jail. The civil rights figure had been arrested in April 1963 for publicly protesting, which was deemed illegal in the southern state at the time. Soon after his arrest, eight white clergy figures admonished King for his supposedly "unwise and untimely" protest for racial equality. And this enraged King.

I must confess that over the past few years I have been gravely disappointed with the white moderate. I have almost reached the regrettable conclusion that the Negro's great stumbling block in his stride toward freedom is not the White Citizen's Counciler or the Ku Klux Klanner, but the white moderate, who is more devoted to 'order' than to justice; who prefers a negative peace which is the absence of tension to a positive peace which is the presence of justice [...]

Although said 55 years ago, the relevance of King's words remains in 2018. So, it makes sense that people are quoting him online, bringing attention to how certain white moderates try to sanitize King's words, and silence Black Lives Matter protesters by telling them to wait for justice.

In his letter sent from jail, King went on to criticize white moderates. He said that a white moderate is someone "who constantly says: 'I agree with you in the goal you seek, but I cannot agree with your methods of direct action'; who paternalistically believes he can set the timetable for another man's freedom." Such a person is, according to King, someone "who lives by a mythical concept of time and who constantly advises the Negro to wait for a 'more convenient season.'"

In 2015, a popular hashtag under #ReclaimMLK began to remind folks to keep all of King's political ideology in mind, not just the convenient bits. One of the co-founders of Black Lives Matter, Alicia Garza, told The Root that the purpose of the hashtag was to remind people of King's more radical and necessary words. The same hashtag surfaced this Monday after King's admirers took to Twitter.

Ultimately, King had a strong message for the white clergy members that condemned him, asking them to open their understanding to how racial inequality hurt African Americans. He said, "I had hoped that the white moderate would understand that law and order exist for the purpose of establishing justice and that when they fail in this purpose they become the dangerously structured dams that block the flow of social progress."

He added, "I had hoped that the white moderate would understand that the present tension in the South is a necessary phase of the transition from an obnoxious negative peace, in which the Negro passively accepted his unjust plight, to a substantive and positive peace, in which all men will respect the dignity and worth of human personality."

The Birmingham jail letter is worth reading in its entirety. It remains a timely reminder for white Americans that there was a much more radical and critical side to King that should never be forgotten.