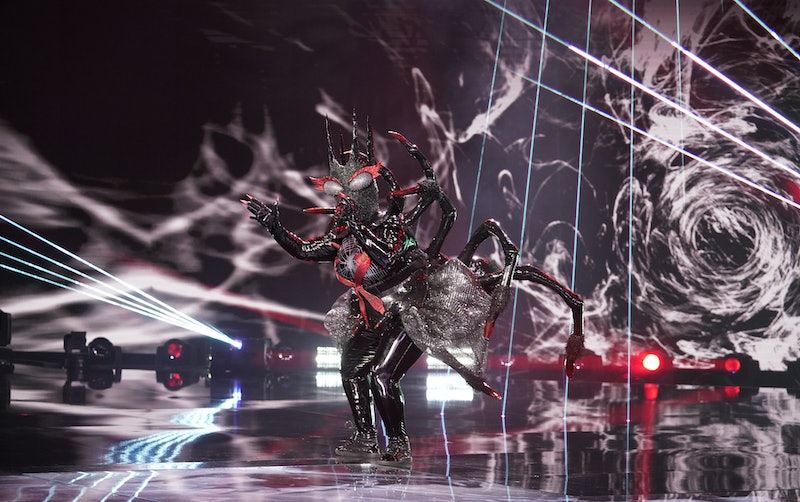 During Wednesday night's Masked Singer episode, the panelists had a lot of theories about who the Black Widow might be. Jenny McCarthy guessed former Glee actor Amber Riley. Ken Jeong didn't want to be fooled by another co-star after failing to recognize his Dr. Ken sister Margaret Cho in Season 1, so he guessed Community's Yvette Nicole Brown. And Robin Thicke was stumped, but threw out 30 Rock alum Sherri Shepherd as a suggestion. However, fans of the show think it's actually Raven-Symoné, and based on the evidence, they could be right.

The first hint in the Black Widow's clue package was a peach, and since Timotheé Chalamet is too busy with Little Women and The King to be on the show, this probably has less to do with Call Me By Your Name and more to do with the state of Georgia, aka the Peach State. The Black Widow also said "welcome to my empire," and Georgia's other nickname besides the Peach State is the "Empire State of the South." None of the celebs the Masked Singer panel suggested are from Georgia, but Raven is from Atlanta. (Plus she was a guest star on Empire, so the clue could have a double meaning.)

The Black Widow's clues about "deleted scenes," "director's cuts," and images of television sets weren't super specific to one person. As panelist Ken Jeong pointed out, that could mean any actor. But then the camera focused on a crystal ball and a Tarot card called the "Divine Oracle." Let's remember who Raven played in That's So Raven: someone who could see the future, like an oracle!

Another clue that points to Raven is the fact that the Black Widow said, "I've been packaged my entire life. You'll find I'm a little edgier, darker, and more alien than you know me to be."

Thicke astutely pointed out that this likely means someone who is known for being cheerful, which could be someone in daytime television like Shepherd, who was a co-host on The View. Raven has also been a co-host on The View, but another type of celebrity that may feel the desire to break out of a "fluffy persona," as Thicke put it, is a precocious child star. Even before That's So Raven and Cheetah Girls, Raven was in the public eye. She was three years old when she began starring on The Cosby Show, and wasn't even a teenager by the end of Hangin' With Mr. Cooper.

Because she's a musician, we also know Raven can sing. Take another listen to the Black Widow's rendition of "I Wanna Dance With Somebody" on The Masked Singer (below). Then, compare it to Raven's stripped-down cover of Corinne Bailey Rae's "Put Your Records On" (also below). Once she gets going, you can definitely hear the vocal similarities.

With all of that in mind, this may be one of the most convincing guesses to come from Season 2 so far. Hopefully, the judges can figure it out too.