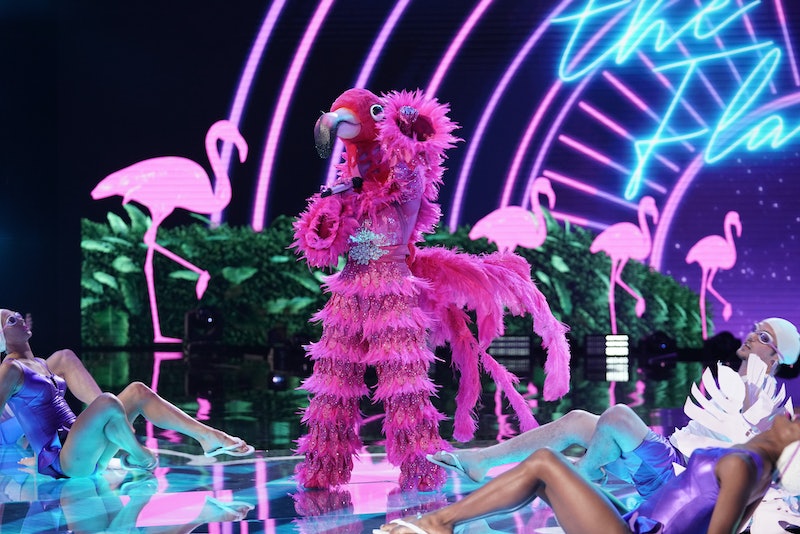 The Masked Singer may only be one week into Season 2, but viewers are already convinced one early theory about the Flamingo is correct. The contestant hasn't even technically performed yet, but when a brief clip of the Flamingo singing "Lady Marmalade" was released earlier this month, fans immediately narrowed in on one person: Adrienne Bailon, host of talk show The Real and former Cheetah Girls star.

The closest thing to a real clue about The Flamingo The Masked Singer has revealed is that whoever's hiding behind the costume "loves mascara." That isn't a lot to go off of, but Bailon does have a YouTube channel where she's been known to post makeup tutorials, so that sort of lines up. More importantly, Bailon's singing voice sounds a lot like The Flamingo's, and the confidence and stage presence the Flamingo exudes certainly suggests someone from a performance background. Since Bailon was a member of the girl group 3LW, that only seems to further confirm it is her beneath all those pink feathers. In fact, Bailon's co-workers are so sure she's the Flamingo, they confronted her about it during a recent episode of The Real.

Of course, Bailon played it off. "I literally don't understand how people can think I can do [The Real] at 4 o'clock in the morning and [The Masked Singer] at night, let's start there," she said, either omitting or not considering the fact that The Masked Singer is pre-taped. "I actually think it's really flattering because people are saying really nice things, so that's dope" she continued, "but at the same time, the answer is no [it's not me]."

After her co-workers kept pressing, Bailon started throwing out other ideas. "I thought it was maybe [Fifth Harmony alum] Ally Brooke, but she's doing Dancing With the Stars," she said. But neither the hosts of The Real nor viewers at home were convinced. "So @AdrienneBailon really up here lying on a show called 'The Real' about her not being the flamingo. girlllll let's not act like the masked singer is not recorded in advanced [sic]... It's you and every cheetah girl know it," tweeted one viewer. And as Tamera Mowry-Housley concluded on the show, "If you were [The Flamingo], you couldn't tell us anyway."

There are some other Flamingo theories floating around (one person suggested on Twitter it could be JoJo), but by and large all roads seem to point to Bailon right now. In 2015, she told her Real co-hosts that she stopped singing because she was "scared to fail" and felt overwhelmed by the experience of working in the music industry. But as we saw in Season 1, the anonymity of The Masked Singer allows celebs to really let loose and subvert any existing expectations — especially in the case of Season 1 winner T-Pain. Perhaps this is Bailon's way of expressing her love for singing in a less high-pressure setting. Or she could be telling the truth and it's someone else entirely. The Masked Singer is a lot of things, but it's definitely not predictable.