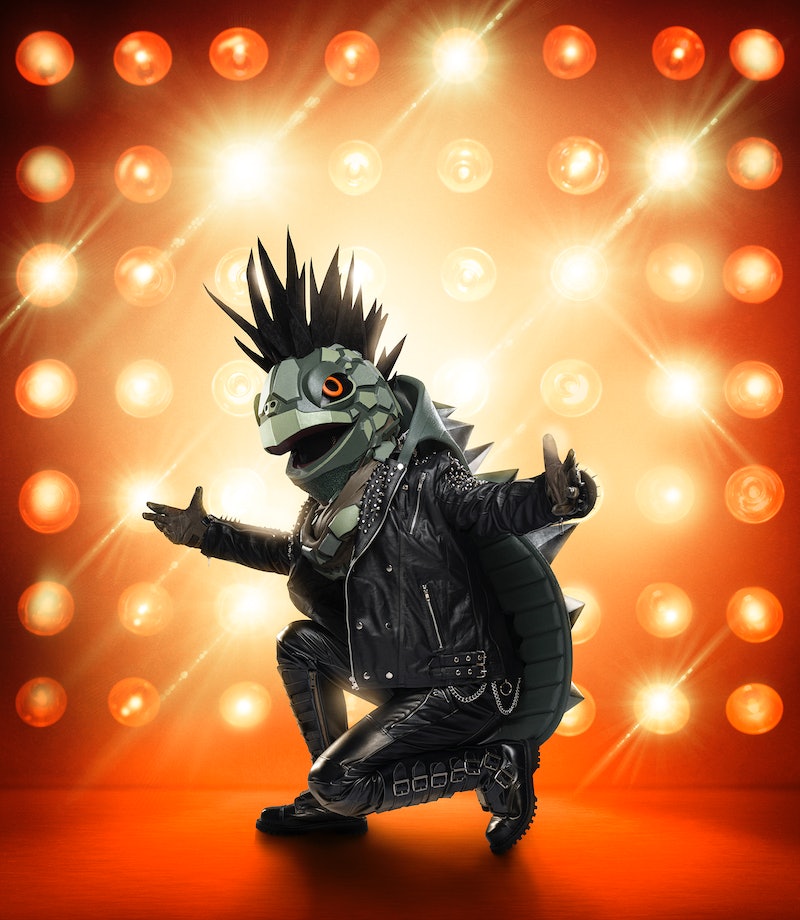 If slow and steady wins the race, then The Masked Singer Turtle is off to a good start. But, while he may have survived the first week of competition, fans are already convinced they know who is under the mask. This Masked Singer Turtle theory will take you back to the early '2000s, as viewers are pretty positive he's really Jesse McCartney.

On Sunday, Feb. 2, The Masked Singer returned for its third season after Super Bowl LIV, bringing 18 new disguised singers to the stage. Among the new cast of costumed celebrities there are a combined 69 Grammy nominations, 11 Super Bowl appearances, and 3 stars on the Hollywood Walk of Fame, according to SB Nation, and viewers already have plenty of thoughts on who the new class of masked contestants could be. But the most common guess amongst viewers was McCartney as the Turtle.

During his clue package video, the Turtle said, "At the starting line of my career, I was surrounded by other hungry newcomers." McCartney did start his music career young, and was just 12 years old when he stepped onto the music scene as a member of the boy band Dream Street — the very definition of "hungry newcomers." And, in a possible nod to his boy band roots, the Turtle added, "It felt like everyone around me was fighting tooth and nail for the dream."

After his performance of "Kiss From A Rose," The Masked Singer judges seemed pretty stumped. Nicole Scherzinger guessed Zac Efron, Ken Jeong ventured it could be Donnie Wahlberg, and Robin Thicke predicted Joey McIntyre of New Kids On The Block was under the mask.

It looks like the judges might have missed a super obscure clue that also points to McCartney: the surfboard. During the clue package video for the Turtle, he held a surfboard and said, "I would love to make a big splash." As pointed out by @kmoakbrittain, McCartney, "played a surfer in a show called Summerland." In 2004, he starred as a young surfer named Bradin Westerly in Summerland, a family drama. (Though, taking this clue into consideration, Scherzinger's guess of Efron wasn't too far off, as he also guest-starred on the show.)

Alas, while Summerland could be a clue about Efron, viewer @kathleen_hanley debunked that Turtle theory, writing, that any High School Musical fan would be able to recognize Efron's smooth vocals — and this wasn't it.

Most fans were convinced McCartney was behind the mask, with one viewer tweeting, "Calling it right now. Turtle is Jesse McCartney. The fan, @_nixter, later added, "I was obsessed for YEARS so I definitely know his voice more than a grown woman probably should."

Another viewer made a case for McCartney on Twitter, pointing out that the clue package could be a nod to the singer's opening slot for New Kids on the Block, writing in part, "STEP BY STEP REFERS TO JESSE OPENING FOR NKOTB BACK IN 2009." In 2009, McCartney opened for NKOTB during their "Full Service Tour," according to Concert Archives.

McCartney himself has yet to comment on the matter, but The Masked Singer is good at keeping the identity of competitors a secret before the big reveal. Season 3 of Masked Singer will continue to air episodes every Wednesday, and fans will just have to keep watching to find out if the iconic '00s star really is behind the turtle mask.

More like this
The First Trailer For 'That '90s Show' Includes So Many Nods To The Original Series
By Jack Irvin, Alyssa Lapid and Grace Wehniainen
Kim K Is Putting Kanye’s Memorabilia — Like Grammys & Clothes — In A Vault
By Jake Viswanath
Brandon & Serene Reveal The Major Relationship Milestone They Celebrated After 'BiP'
By Kadin Burnett and Grace Wehniainen
What Jen Shah's Delayed Sentencing Could Mean For The 'RHOSLC' Season 3 Reunion
By Brad Witter and Jake Viswanath
Get Even More From Bustle — Sign Up For The Newsletter