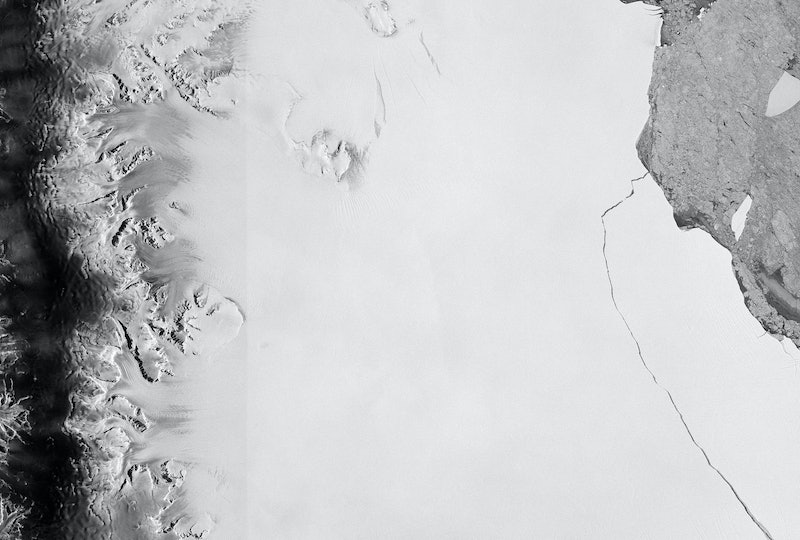 Nature is pretty amazing — but it's also pretty confusing, and maybe even a smidge terrifying. Vice published a story about a massive hole in Antarctica and the gaping void is reportedly as large as the state of Maine or, if you're into more analogies, the size of Lake Superior (which, in case you forgot or weren't aware, is the greatest and largest of all Great Lakes). So, in other words, it's huge. Vice editor Kate Lunau spoke with atmospheric physicist Kent Moore to learn more about the mysterious and crazy-big hole down in the freezing south.

According to Moore, the hole is "quite remarkable" and appears as if "you just punched a hole in the ice." Moore isn't off with the description; in images shared by Vice and provided by NASA Worldview, it's clear that the strange hole not only is gargantuan in size, but is also random in its placement. Normally, such a hole would appear in the warm parts of coastal Antarctica. But in this case, the hole is "deep" within the ice pack and that placement has rendered its origin unexplainable — at least for now.

Normally, though, such a hole containing water and surrounded by thick sheets of ice is called a "polynya." It's a phonetically-pleasant word for the development of a naturally-occurring ice hole.

Typically, there are two ways polynyas are formed. One process refers to polynyas that are formed with the help of heat or, in other words, driven by thermodynamics. In simpler words, when the temperature of water is above normal, the formation of ice is weakened and a hole may appear.

Polynyas can also be formed with the help of katabatic wind (stay with me here). While "polynya" is a loanword from Russian for a natural ice hole, "katabatic" is derived from the Greek (katabasis) for "descending" or "lowering." These types of winds often blow ice away from a coastline. Such a wind can thin the layering of ice and create a hole in its place.

At this moment, it isn't clear whether thermodynamics led to the creation of this new hole or katabasis did. But either way, it's a rather large occurrence and quite removed from the coastline. According to Moore's assessment published in the Vice report, the polynya is "hundreds of kilometres [sic] from the ice edge. If we didn't have a satellite, we wouldn't know it was there."

Don't worry, though. This isn't the first time that a hole has appeared in Antarctica. Back in the 1970s, Moore told Vice, a polynya was found in the Weddell Sea of Antarctica. It disappeared for nearly 40 years and reappeared, mysteriously, last year. In 2016, the hole remained open for a few weeks and then closed up. Now, in October, it's returned.

In spite of an on-and-off pattern of emergence for the past four decades, Moore told Vice that it was not clear why the hole was forming. Moore, who works with the Southern Ocean Carbon and Climate Observations and Modeling project, said that it was "premature" to blame it on climate change. That said, the hole carries implications for surrounding natural bodies, including oceans, as it would point to the rise and fall of water temperature.

The good news? With the help of technological advancements in data collection, scientists have been able to amass tons of insight on such occurrences and with the help of such findings, they might just be able to find out why this Maine-sized void keeps coming up.