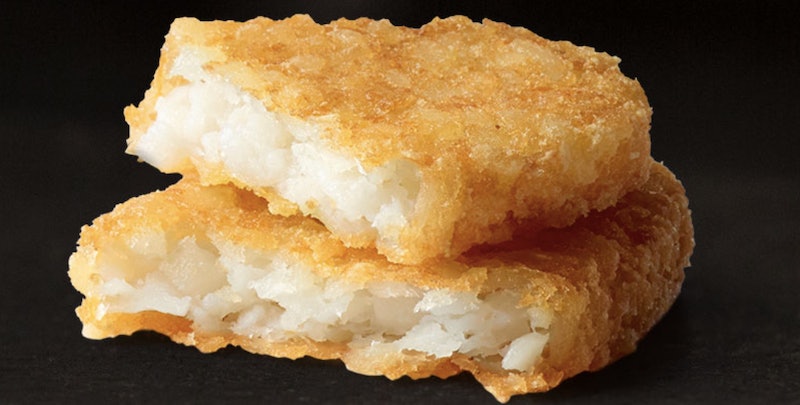 In the world of breakfast, there are a few staples the meal would not be complete without. Scrambled eggs dusted with salt. Strips of glistening bacon. Toast. And, potatoes. But not just a helping of mashed potatoes. No, these potatoes must be specific. And now this McDonald's hack for hash browns that Peter Pham from Food Beast brought to the world's attention will upgrade your breakfast, game one hash brown patty at a time.

When there isn't time to whip up breakfast at home, McDonald's welcomes diners for an Egg McMuffin at their leisure or on the go. If in a hurry, the drive thru wants you to come through. At whatever rate you're receiving breakfast, it's always satisfying. But with a few extra words, McDonald's breakfast will level up.

A hack sort of sounds like you're cheating the system. This isn't really the case with this particular fast food hack. Nobody is hacking into the chain's mainframe to distribute happy meal toys with every Big Mac. Think of this particular hack not as anarchy but as a password. When ordering hash browns you may not he prompted to spit out the magic words, but when you cough them up, you'll be rewarded. All you have to say is, "well done." Perhaps throw in a please. And just like that your breakfast is complemented with well done hash browns.

The potato is a versatile vegetable. It can be enjoyed in a multitude of ways throughout the day and in the morning it appears on our plates as shredded, flattened, and fried. Hash browns are the morning's french fry. A hash brown should be crispy. Any presentation otherwise would result in a sad, soggy clump taking up valuable breakfast plate real estate. Fear these sad potatoes no more.

Per Pham's post on Food Beast, when you ask for your hash browns well done at McDonald's, you'll get golden crunchy patties. Now you can not only accentuate the first meal of the day with deeply golden brown potatoes — thanks to All Day Breakfast, you can have them whenever you want. It's really that simple. At least when you're under the golden arches.

An upgraded breakfast is as easy as a few key words and a few extra moments in the fryer. If the newly improved crispy hash brown hack wasn't enough, maybe the engineering of the fast food breakfast item will have you out the door and rolling through the drive thru.

At McDonald's hash browns don't require a fork. They can practically be considered finger food.

A hash brown comes in a pouch for crispy, blissful bites sans silverware. It doesn't hurt that the pouch is basically a shield defending your clean hands against grease. So just when you thought breakfast couldn't get better, hash browns got crispier and easier to eat.

Save yourself the trials of achieving a professional caliber of crispiness at home and head for the drive thru. Just don't forget to say the magic words, also known as the "well done" hack, and to add a "please" and "thank you" at the end. Happy feasting and ~good~ morning.