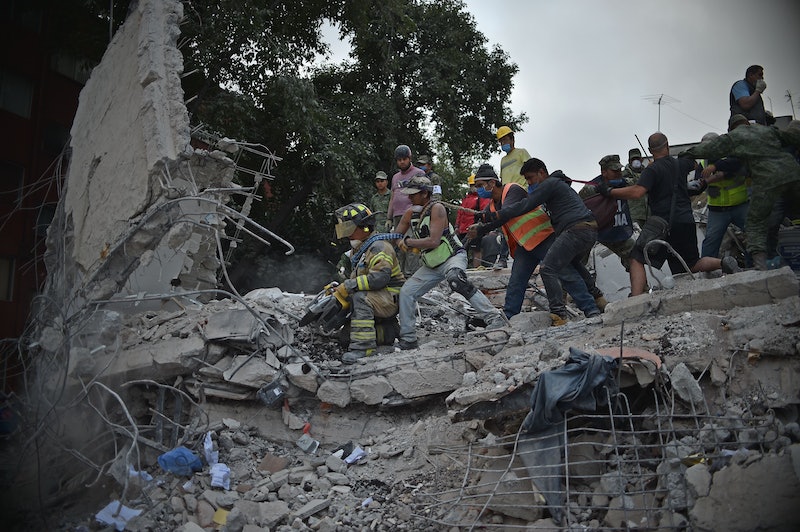 A large portion of central Mexico was struck by a devastating earthquake Tuesday that has claimed more than 200 lives. The level of destruction can be difficult to fathom for those who have never witnessed this particular type of disaster firsthand — but in the age of smartphones and social media, the images from the earthquake make the damage hit close to home. One video of the Mexican earthquake showcases the strength and speed of this natural disaster, and gives a pretty good indication of how much help the nation will need as it starts to recover.

Its exact origins aren't clear, but the video was posted to Twitter on Tuesday by Qasim Rashid, a Muslim-American lawyer and activist. Within the span of just a few seconds, the building in the video goes from standing to completely decimated. The dust cloud from the collapse seems to attack the person holding the camera, even though they appear to be at least 50 yards away from the building. It's unclear if there was anyone inside the building or what it was used for, but there are many, many more like it throughout central Mexico right now.

According to the U.S. Geological Survey, the 7.1 magnitude quake has brought down at least 44 buildings in Mexico City alone according to its mayor, Miguel Angel Mancera. The earthquake's epicenter was actually 80 miles southeast of Mexico City, in the state of Puebla. However, due to the multiple building collapses, most of the deaths have occurred in the Mexico City area. Several other videos of deadly building collapses have emerged on social media, as well as videos that show buildings swaying with the force of the quake.

According to The Los Angeles Times, the topography in the region hit by the earthquake makes Mexico City especially prone to destruction. The city sits in an ancient lakebed, The Times reported Tuesday, and the soft, wet clay soil underneath doesn't provide a stable foundation for buildings. Geologists say Mexico City "shakes like a bowl of Jello" during a quake.

Since the earthquake of 1985, newer buildings have radically improved their construction standards to stand up to natural disasters. Guillermo Lozano, humanitarian and emergency affairs director for World Vision Mexico, told The Times that most of the downed buildings are older ones that are only two or three stories. Unfortunately, that very likely means that most of the communities affected by the disaster are also lower income and will need a lot of support in the coming months.

If you want to help the people recovering from this tragedy, there are several excellent local charities that you can contribute to. The Brigada de Rescate Topos, nicknamed Los Topos, was created to aid relief efforts after the 1985 earthquake in Mexico, which actually happened exactly 32 years before the quake on Tuesday. The group has extensive experience performing search and rescue missions during disasters, and they make it easy to give directly via PayPal at donativos@brigada-rescate-topos.org. Plus, your donation will go a long way because the group has the local connections needed to access resources better than international groups that don't work in those communities consistently.

The videos from the earthquake should highlight just how important it is to help after this kind of tragedy. The emotional toll of a disaster like this has to be devastating, even for those not directly affected. It can mean so much to have people notice and reach out when you are struggling, even if it's just helping in a small way, so do what you can as often as you can to help the relief efforts in Mexico over the next few months.