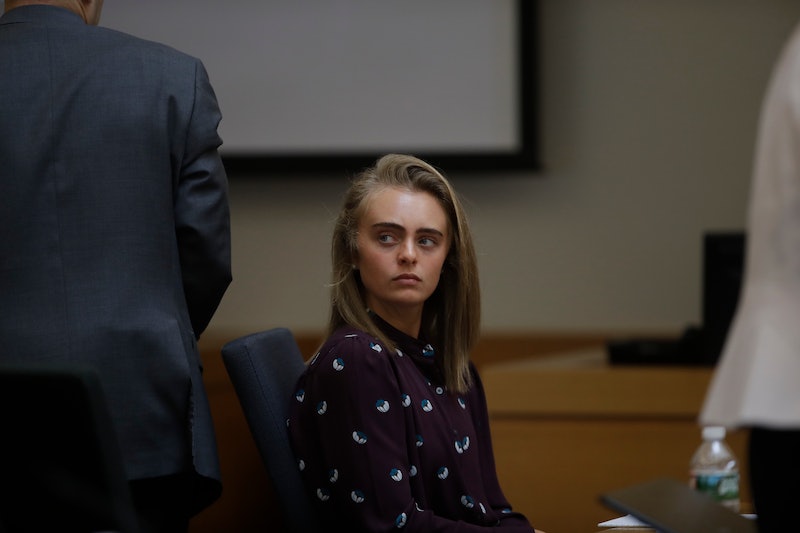 Her sentence was suspended while the Supreme Judicial Court of Massachusetts considered an appeal, but on Wednesday the court found that Michelle Carter caused Conrad Roy III's suicide in July 2014, as The Boston Globe reports. The punishment stands, and Carter will spend 15 months in prison.

Carter's lawyers had argued that her calls and texts to her boyfriend in 2014 encouraging his suicide were protected forms of free speech, but the court unanimously disagreed.

"The evidence was sufficient to support the judge’s finding of proof beyond a reasonable doubt that the defendant committed involuntary manslaughter as a youthful offender, and that the other legal issues presented by the defendant, including her First Amendment claim, lack merit," the ruling reads. "We therefore affirm."

Carter was 17 when Roy died by suicide and was listening on the phone while it happened. At the time, Carter had just recently gotten out of a psychiatric hospital, The Globe reports.

Her lawyers took issue with the high court's ruling, telling The Boston Herald that it "adopts a narrative that we do not believe the evidence supports." Defense attorney Daniel Marx added, "We continue to believe that Michelle Carter did not cause Conrad Roy’s tragic death, and she should not be held criminally responsible for his choice to end his own life. Today’s decision stretches the law to assign blame for a tragedy that was not a crime."

The juvenile court judge who first found her guilty focused on Carter not intervening or calling for help. "She did not call the police or Mr. Roy’s family," the judge wrote. "She called no one. And finally, she did not issue a simple additional instruction: Get out of the truck."

The high court wrote essentially the same thing. "She did absolutely nothing to help him: she did not call for help or tell him to get out of the truck as she listened," the ruling reads.

The high court also focused on text messages in its decision to uphold the decision, according to Boston 25 News. "The defendant's statement was more than adequately corroborated not only by the victim's death but also by text messages exchanged with the victim encouraging him to" die by suicide, the court wrote.

Those were not the only text messages mentioned in the case, though. Carter had also sent messages to friends after the incident, blaming herself. "His death is my fault like honestly I could have stopped him I was on the phone with him and he got out of the car because it was working and he got scared and I fucking told him to get back in,” Carter wrote to a friend in a text on Sept. 15, 2014, according to Boston 25 News.