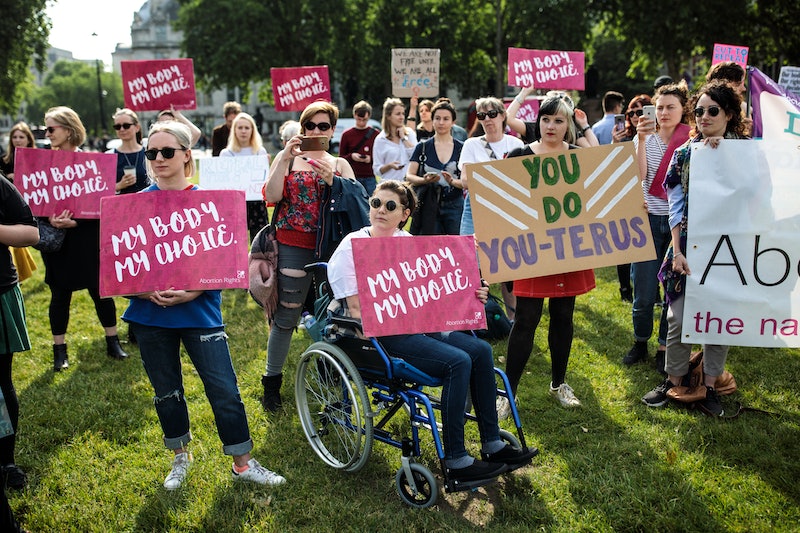 Months after it was enacted, a federal judge on Tuesday ruled Mississippi's abortion ban unconstitutional, and eviscerated its proponents in his decision. But not only did U.S. District Judge Carlton Reeves reprimand the Mississippi state legislature for passing the law as a transparent attempt to send the abortion ban to the Supreme Court, he also shared a sobering observation about men legislating women's bodies.

"As a man, who cannot get pregnant or seek an abortion, I can only imagine the anxiety and turmoil a woman might experience when she decides whether to terminate her pregnancy through an abortion. Respecting her autonomy demands that this statute be enjoined," Reeves wrote.

Although tremendous gains have been made, most politicians in the United States are, and have been, white men. But while men make up the majority of lawmakers, one of the most volatile and perennial legislative fights — over access to abortion — revolves around regulating women's bodies, and Reeves addressed this problem, directly.

"The fact that men, myself included, are determining how women may choose to manage their reproductive health is a sad irony not lost on the Court," he wrote.

While it seems like an obvious disconnect, the arguments about abortion access tend to center around fetus viability, or else moral arguments frequently grounded in specific interpretations of religious texts. Rarely does a male lawmaker or judge reflect on the fact that most legislators are effectively making decisions about a medical procedure that will never directly impact their own health, let alone the inherent unfairness of that dynamic.

As for Mississippi, the state's legislature reflects national trends insofar as it has way more men — in both the House and the Senate — than it does women. Still, these state lawmakers chose to implement a ban that would have limited women's control over their health care options. That Reeves opted to include a gendered perspective in his decision, which also suggested that the legislature was wasting his professional time, quietly highlights this fact.

"The Court’s frustration, in part, is that other states have already unsuccessfully litigated the same sort of ban that is before this Court and the State is aware that this type of litigation costs the taxpayers a tremendous amount of money," Reeves wrote. "No, the real reason we are here is simple. The State chose to pass a law it knew was unconstitutional to endorse a decades-long campaign, fueled by national interest groups, to ask the Supreme Court to overturn Roe v. Wade."

Mississippi is far from the only state to attempt such a ban, as Reeves mentioned. Neighboring state Louisiana currently has a 15-week abortion ban on hold which make performing an abortion after 15 weeks an imprisonable offense, according to the Houston Chronicle. Kentucky also has its own 15-week ban on hold. The Ohio legislature is trying to ban abortion at six weeks, again, though Gov. John Kasich said he will veto the bill if it makes it to his desk.

All of this is to say that these types of attacks on abortion access are incredibly — and startlingly — common right now. And while it's likely that variations of these abortion bans will continue to pop up from state to state, it appears that at least one federal judge is willing to vocally deride sexist legislating and call it what it is — a truly sad irony.