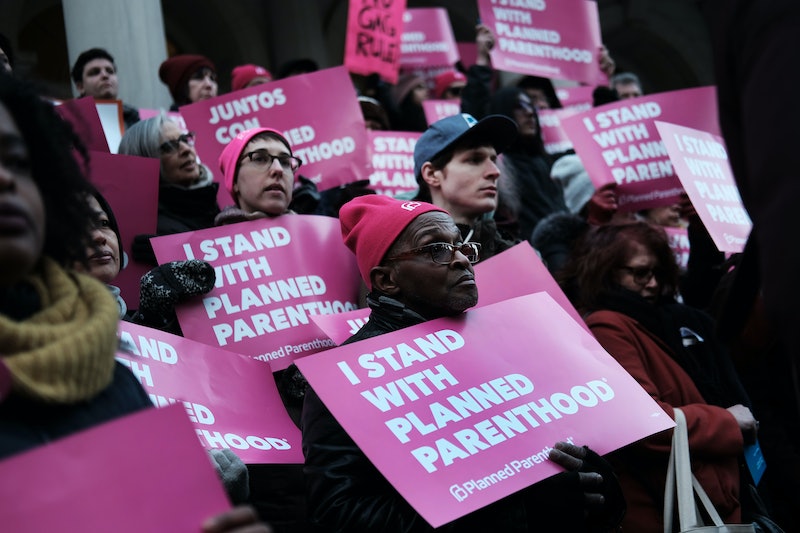 The abortion rights movement secured a crucial, if temporary, win on Monday. The latest Missouri Planned Parenthood update took place when a circuit court judge ruled that the clinic may continue to perform abortions through Friday. This was an extension of a previous ruling, which also aimed to give the St. Louis clinic more time to battle the licensing issue that threatens its ability to offer safe, legal abortions to pregnant people. The deadline still looms in the immediate future, though — and a specific state panel will face the clinic next.

According to The Associated Press, Judge Michael Stelzer has issued several extensions for the clinic in recent weeks, allowing it to continue operating while the legal battle goes on. At the same time, the clinic has continued to face legal obstacles. On June 21, Missouri's state health department declined to renew the St. Louis clinic's license. However, Stelzer maintained on Monday that the clinic still has other options outside of court to battle the license issue. Per The Associated Press, he directed the clinic to bring the issue to the Administrative Hearing Commission next, which is a state panel that handles issues between state agencies and businesses.

There are four commissioners on the panel, according to The Kansas City Star. Three of those four commissioners were appointed by the last Democratic governor, the publication reports, and the fourth, a Republican, has indicated he might recuse himself from the Planned Parenthood case.

Additionally, The Kansas City Star notes that although Judge Stelzer dismissed the clinic's claims for failing to exhaust administrative remedies, he did it "without prejudice," which means the case could be brought before the court once more in the future. All in all, representatives for Planned Parenthood have indicated cautious optimism at the recent updates to the situation.

In a statement, Dr. Colleen McNicholas, an OB-GYN at Reproductive Health Services at Planned Parenthood of the St. Louis Region, said per The Associated Press, “We will continue this fight in the Administrative Hearing Commission, and we won’t stop until every person can access the care they need when and where they need it."

If the panel disagrees with the clinic's argument for a license renewal, then that would likely mean the closure of the last abortion clinic in Missouri. This would make it the first state without an abortion clinic, though several other states currently face similar battles. According to NBC, Missouri is one of six states who only have one abortion clinic; the other states are Kentucky, Mississippi, North Dakota, South Dakota, and West Virginia.

To NBC, M’Evie Mead, the director of policy and organizing of Planned Parenthood Advocates in Missouri, said,

It is still very, very difficult to access abortion in Missouri because of medically unnecessary hoops and regulations, but you can still come to Planned Parenthood today for all of your reproductive health care. And that is a good day for women.

If you want to help the St. Louis clinic in its battle to continue providing safe and legal abortions to women in the area, you can donate to Planned Parenthood. You can also donate to the ACLU, or to GoFundMe's national fundraising campaign to protect abortion and reproductive rights. The proceeds from this campaign will go towards the National Network of Abortion Funds, Planned Parenthood Federation of America, Planned Parenthood Action Fund, American Civil Liberties Union, and the ACLU Foundation.