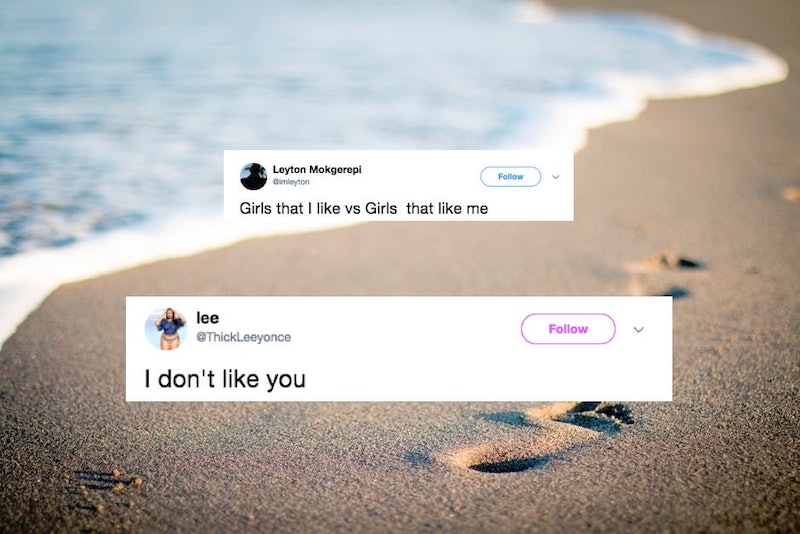 The path to internet justice can be surprisingly swift and is often paved with delicious clapbacks. Take, for instance, Lesego Legobane, a 24-year-old model who had the perfect comeback after being turned into a sexist meme. On Tuesday afternoon, a person used an image of Legobane, who is a plus-size model also known by her phenomenal handle “ThickLeeYonce,” in a body-shaming Twitter post. Barely an hour later, Legobane replied to the tweet and her response has since gone viral.

The original tweet included a picture of model Joëlle Kayembe next to an image of Legobane. The caption reads, “girls that I like versus girls that like me.” Regardless of whether the original tweet was an attempt at humor or a compliment to Kayembe, it reads as neither. The photo set feeds into sexist comparisons of women with their worth based solely on their perceived attractiveness. It’s essentially a lazy amalgamation of fat-shaming, misogyny, and harmful notions of beauty and value. It is, to put it simply, a garbage tweet.

Legobane told BuzzFeed News she found out about the tweet after someone tagged her in it. She said she wanted the person who posted it “to know his place.” “So,” she told BuzzFeed, “I decided to reply because I felt he was being rude."

Her response, which has been liked over 739,000 times by people including Ariana Grande and Ava Duvernay, consists of just four words.

Legobane’s response has the internet cackling, as evidenced by the literal hundreds of thousands of retweets. If you need a pick-me-up, I suggest perusing the thousands of replies to her tweet which are basically people basking in the warm glow of Legobane’s sick burn. “I would like to report a murder,” Twitter user Laura Saba wrote.

Joëlle Kayembe, the other model in the tweet, also saw the post and was equally unimpressed. “As if the world needed another example of an obnoxious ass,” Kayembe’s tweet reads. Kayembe told BuzzFeed News she’s a fan of the way Legobane responded to the post and was not pleased to see that she herself had been included in the original tweet. “It was not a well thought out compliment, if that is what he was trying achieve,” Kayembe said. “And to use one woman's picture (mine in this case) to body-shame another is just rude and unnecessary!”

Another person who’s definitely seen Legobane’s response? The guy who posted the original, awful tweet. Less than an hour after Legobane’s reply, and barely two hours after his original post, this guy posted a second meme using the same image of Legobane. This time, however, it was accompanied with the caption, “girlfriend goals” and six fire emojis. Sorry, sir, no amount of fire emojis are going to the soothe Legobane’s third-degree burn. Also, the original post still exists on his timeline. So, not sure who he thought he was fooling with this second post, but it certainly wasn’t anyone on Twitter.

Legobane told BuzzFeed News she’s been “overwhelmed by the love,” mentioning that she’s also received messages from women saying they’ve been inspired by her self-love. “It means a lot to me that I can change someone's perception about their physical appearance by loving my own,” she told BuzzFeed.

“I hate it when men think that fat girls are desperate and that we like every other guy ’cause ‘we don't have options’ ... it's utter nonsense,” she said. “I can be fat and still be out of your league.”