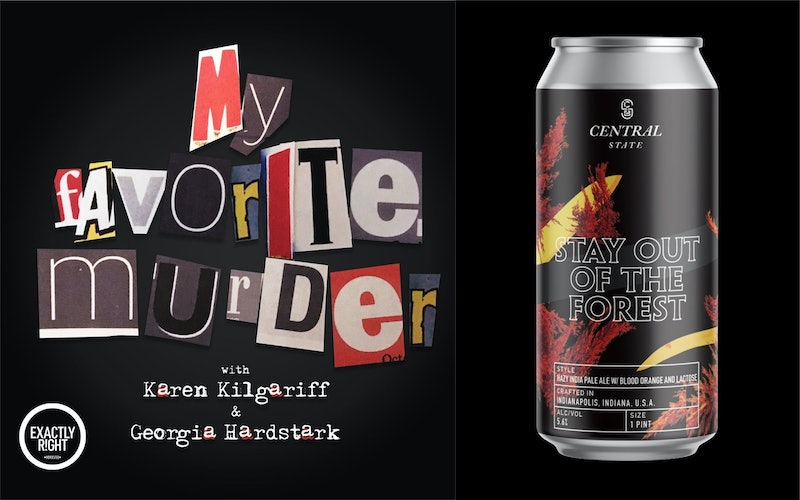 It’s nearly impossible not to be familiar with My Favorite Murder, the true crime podcast with a wide and dedicated following. It’s even more impossible to be unfamiliar with beer, the alcoholic drink beloved by sports dads, craft brewery hipsters, and college students alike. In the spirit of marrying things people love, there is now beer inspired by My Favorite Murder, combining two cult classics into one.

Indianapolis-based brewery Central State Brewing Co. is to thank for the podcast-inspired beer aptly named "Stay Out Of The Forest." The name is an homage to a quote from podcast hosts Karen Kilgariff and Georgia Hardstark which is already emblazoned on t-shirts, duffle bags, and now, the name of a beer. If you’ve ever been told to “Stay sexy and don’t get murdered,” that too is a quote from the podcast. Also, it’s just good life advice.

So, what does a murder podcast-inspired beer taste like? “It’s an IPA with lactose and blood orange, for the blood part, obviously,” Josh Hambright, Central State’s co-founder and head brewer, told The Takeout. If you’ve never tried beer with lactose, it adds a depth of sweetness to the brew. Some brewers also say it creates a fuller bodied beer. However, talking about “bodies” in the context of a murder beer seems...inappropriate. Or maybe more appropriate? I’m new to this whole murder beer thing.

“The idea was actually hatched by a couple of the local beer reps for our distributor. They found out that My Favorite Murder was coming to Indy and they approached us, asked if we’d be willing to do it with them,” Hambright told The Takeout.

The “Stay Out of The Forest” beer will be available Monday, March 18 at Central State’s Taproom The Koelschip, according to a release emailed to Bustle. Murderinos attending the live podcast taping will get to try the beer a day early. The beer will be available to show guests on March 17 at Indianapolis’ Murat Theater during the My Favorite Murder live show. However, if you haven’t already bought your ticket, the event appears to be sold out per the podcast’s event page.

Unfortunately, if you’re not in the Indianapolis-area in the coming weekend, you may not be able to taste the limited-edition beer. You’ll just have to sip rosé in a can or a big ol’ glass of red wine or some other reddish, blood-like drink while marathoning episodes of the podcast.

When you buy the “Stay Out Of The Forest” beer, you’ll also be drinking for a cause. A portion of the proceeds from the beer will be donated to End The Backlog, a program that helps raise awareness of the processing backlog among rape kits. End The Backlog is part of the non-profit founded by Mariska Hargitay, The Joyful Heart Foundation, which works to end social stigma associated with sexual assault survivors, support their healing, and work toward eradicating this type of violence altogether.

“Though experts estimate that there are hundreds of thousands of untested kits in police and crime lab storage facilities throughout the country, there is no comprehensive, national data on the nature and scope of the rape kit backlog,” End The Backlog’s website states. There is an interactive map on the site that lets you see how big the estimated backlog is where you live. In Indiana, there are currently an estimated 4,980 untested kits.

In addition to $3 per pint of "Stay Out of the Forest" sold going toward End The Backlog, there will also be a post-podcast taping afterparty to benefit the organization, according to the IndyStar.

Even if you aren’t in the Indianapolis area, you can support End The Backlog by donating through their website. You can even sip on a beer while you do it.