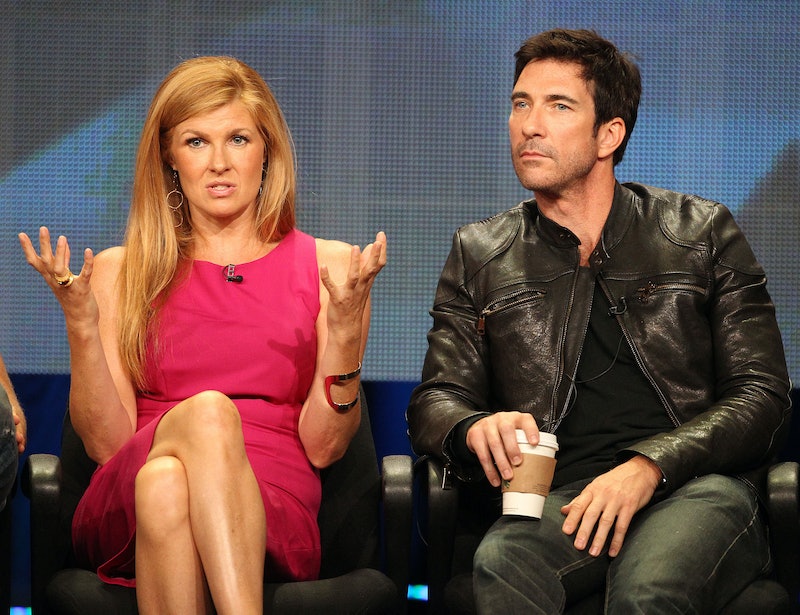 It's been a long time since fans met the Harmon family in American Horror Story's first season, Murder House. In an Aug. 25 Instagram post, show creator Ryan Murphy shared an AHS: Apocalypse photo of Connie Britton and Dylan McDermott reunited on set. In Murphy's photo, Britton and McDermott are all smiles together, but it should bring some creepy memories of Murder House for you. Just seeing them back together in that chilling house is enough to make an AHS fan shudder.

"Connie and Dylan. The Harmon’s in their forever AHS home...Murder House."

Hold on, could this be a confirmation that McDermott and Britton will return to the AHS-verse as Dr. Ben and Vivien Harmon? Will they still be haunting the Murder House, AKA their "forever home"? Last week, Variety reported that the two Murder House actors would be returning to the FX anthology series, but the report did not confirm whether or not they'd be reprising their roles from the first season of the show.

If Britton and McDermott are indeed returning as their original characters, it would make sense. Last month, Murphy announced that AHS: Apocalypse cast actor Cody Fern (from Murphy's American Crime Story: Assassination of Gianni Versace) in the role of Michael Langdon. If you recall, Michael is the child of Tate Langdon and Vivien Harmon, who was confirmed to be the Anti-Christ in the Season 1 finale epilogue.

Legendary actor Jessica Lange is also returning for AHS: Apocalypse for an episode and she will reprise her role as Constance, who is the woman who raised Michael.

Taissa Farmiga, who played Ben and Vivien's daughter Violet, is also returning to the series for Apocalypse and she'll have double duty in Season 8. As reported by Entertainment Weekly last week, Farmiga will play both Violet Harmon from Murder House and her Coven character Zoe. Whether these two characters meet in this epic AHS crossover remains to be seen.

The Return. Cordelia, Stevie and Misty casting a bewitching spell.

If Britton and McDermott are playing the Harmons from Murder House once more, what form might they take? If you remember Murder House, Britton's Vivian died as she gave birth to twins — Michael and a stillborn child, and Ben was hung by Hayden (Kate Mara), Dallas (Kyle Davis) and Fiona (Azura Skye) in the stairwell, though it was made to look like a suicide and he was ultimately happy to be reunited with his wife and daughter. The season finale showed Vivian and daughter Violet haunting a new family in Murder House, so perhaps the Harmon family will reunite as ghosts to keep up the haunting. After all, Murphy did say in the photo's caption that Britton and McDermott were in the Harmons' "forever home." Will the Harmons team up together to put a stop to whatever evil Michael is conjuring up? All that remains to be seen in Season 8.

Though there are still lots of questions and clues about AHS: Apocalypse, it looks like the new season is shaping up to be the spookiest — and most epic one yet.