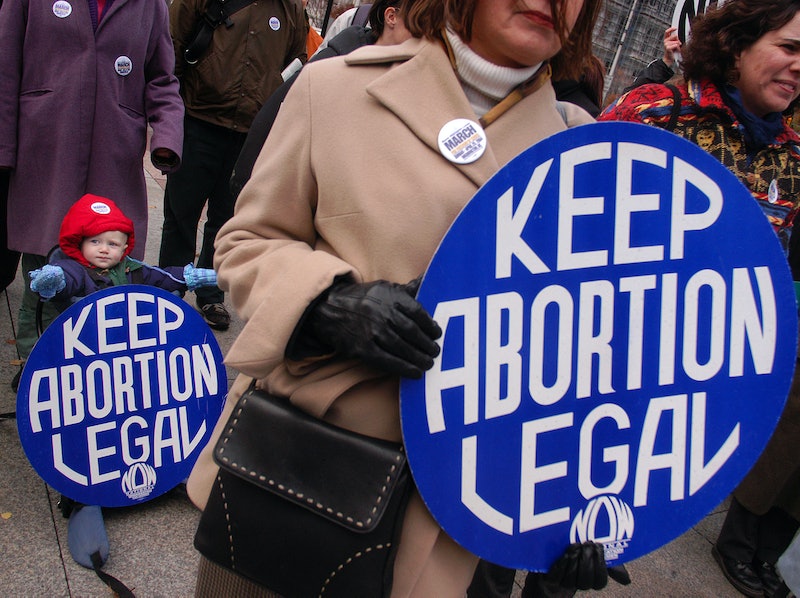 Democrat Governor John Bel Edwards just signed a new Louisiana 15-week abortion ban, and it's one of the nation's strictest pieces of reproductive legislation thus far. Any doctor who elects to perform an abortion past the 15 week mark will face up to two years in prison. Though there's no criminal punishment for women who elect to undergo an abortion, this threat of penalty for doctors will make it much more difficult to have access to a safe procedure. However, there's a small catch.

The viability of this bill actually depends upon what happens to a similar law in Mississippi, The Hill reports. The bill in Mississippi is the same as the one Governor Edwards just signed for Louisiana (a ban on all abortions after 15 weeks of pregnancy). But according to The Advocate, this Mississippi bill was immediately challenged and was put on hold by a federal judge. So now the future of reproductive access and care in two states is dependent upon the result of this legal battle.

Ultimately, this legal matter might be cleared up sooner, rather than later. According to The Advocate, Louisiana lawmakers have asked Louisiana Attorney General Jeff Landry to file a legal brief in support of the Mississippi law. This might expedite the process of both bills being passed to federal courts for approval.

Though Governor Edwards has not yet commented on the bill, known as Senate Bill 181, Louisiana Democratic Senator John Milkovich reportedly praised Governor Edwards' decision, according to The Advocate. "We thank and commend our pro-life governor for signing this bill and once again taking a stand for life," he said. "This is an important step forward in Louisiana's fight to protect the unborn."

As you would expect, advocates of reproductive health are pretty unhappy about the law. Michelle Erenberg, director of the advocacy group Lift Louisiana, had this to say on the matter: "It is painfully clear that anti-abortion state legislators will stop at nothing to push their radical agenda, despite growing evidence that these laws harm women."

The evidence she references is primarily related to the statistically-backed argument that a lack of access to abortions doesn't stop abortions from happening. Rather, it simply compels women to find illegal and often unsafe means to get to the same end. According to a study published in a medical journal called The Lancet, as reported by Broadly, abortion rates in countries that have banned abortion are actually higher than abortion rates in countries that allow legal access to it. In other words, giving women access to safe abortions (without fear of legal or societal repercussions) can actually decrease the rate of abortions.

Prior to the signing of this bill, there were already several restrictive abortion laws in place in Louisiana. For example, women in Louisiana must undergo state-directed counseling after requesting an abortion. They also must wait 24 hours before taking any further steps. What's more, a health care provider is legally required to give the woman an ultrasound, and must "show and describe the image to the woman," according to Lift Louisiana.

Even if this law doesn't make it past the federal courts, women in Louisiana are still at high risk of not having access to safe reproductive care in the future. According to NBC News, Louisiana is one of four states (the other three being Mississippi, North Dakota and South Dakota) that already has a law in place to ban abortion, should Roe v. Wade be overturned.