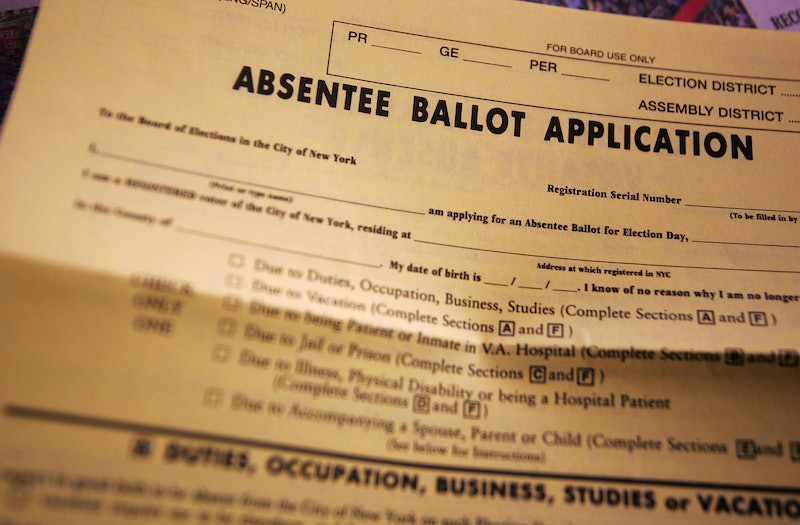 Nov. 6 marks Election Day in the United States and, as a result, many voters will be headed to the polls on Tuesday. However, for some Americans, including women who are giving birth, it's not always possible to get to a polling place and vote. Notably, though, this New York hospital's voting program was designed to make sure that women can still cast their ballots, even while in labor.

As the New York Times reported, Lenox Hill Hospital on the Upper East Side of New York City launched a pilot program to help hospital patients, including women who are in labor, vote during elections. The program was started by Erin Ainslie Smith, an assistant nurse manager, and Lisa Schavrien, an obstetric nurse navigator.

As the paper explained, the program first involves having patients fill out absentee ballot applications, which volunteers then take to the appropriate election office. At the office, volunteers pick up ballots and then bring them back to the hospital so patients can fill them out. Finally, volunteers return these completed ballots to the Board of Elections before the office closes.

These voting services are available for expectant mothers if the timing of their labor means that they will be unable to make it to the polls on Election Day, as Smith explained to the outlet. This service is also offered to partners or family members who are accompanying a laboring woman so they can stay by her side while still ensuring that they cast their ballots.

The paper also pointed out that Lenox Hill's pilot voting program isn't only available to women in labor and those who are with them. Other patients and their relatives and friends may also be eligible to participate in the voting program. Indeed, Schavrien and Smith told the outlet that they hope to make it possible for every Lenox Hill patient to vote by 2020.

Smith emphasized the importance of providing these voting services to patients during her interview with the paper.

... In a world where every vote really does count, and a midterm election that really is important, getting even a few people to vote matters ... We aren’t telling you whom to vote for, or even to vote at all. We just don’t want you to lose the opportunity because you’re unexpectedly in a hospital.

Not all hospitals have voting programs for women in labor and other patients. However, there are still ways that voters who are unexpectedly hospitalized on Election Day can find out more information on voting in their state. The website patientvoting.com lists procedures for emergency medical absentee voting in each state — and offers comprehensive tips on how you can still submit your ballot, should you find yourself hospitalized on Nov. 6.

Patientvoting.com was started by Dr. Kelly Wong of the Brown Alpert Medical School, along with several other colleagues. Wong launched the website after she found that many of her patients were frustrated in 2016 when they were hospitalized and did not know if or how they could vote in the presidential election, as NBC reported. She launched patientvoting.com to help make emergency medical voting information more easily accessible.

Overall, for those who are unable to head to their polling places on Election Day due to medical reasons — like going into labor — it turns out that there are still voting options available. At Lenox Hill, these options include an innovative pilot program facilitated by medical staff. At other locations, patients can still ensure their voices are heard by researching their voting options online or discussing them with medical staff.