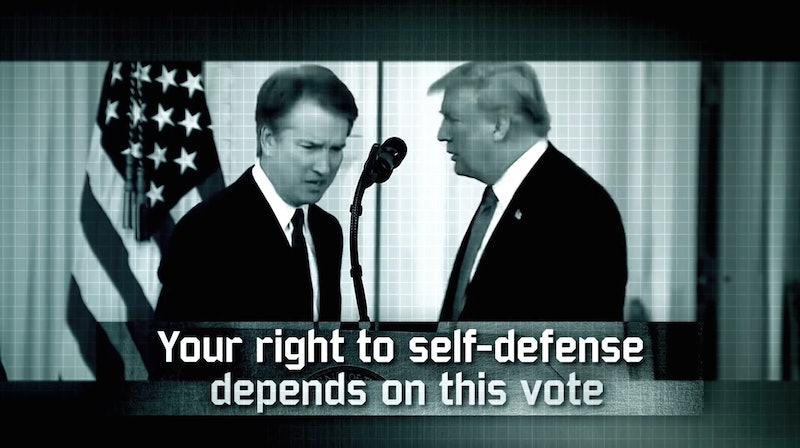 President Trump's Supreme Court nomination has brought into focus the issues the newest justice may have a hand in shaping over the next several decades — among them, reproductive rights, immigration, and gun control. In an effort to secure the gun lobby's position on that last one, the NRA released an ad supporting Brett Kavanaugh's confirmation, and claiming Americans' right to self-defense is in jeopardy without it.

According to a report from USA Today, the seven-figure ad campaign, which was announced Tuesday, will target states with senators who are thought to be on the fence about Kavanaugh's nomination — Alaska, Alabama, Indiana, West Virginia, and North Dakota. Sens. Joe Manchin of West Virginia, Joe Donnelly of Indiana and Heidi Heitkamp of North Dakota were the only Democratic senators to vote to confirm Neil Gorsuch in 2017. Ads will also air in Maine, whose Republican Sen. Susan Collins, like Alaska's Republican Sen. Lisa Murkowski is thought to be a swing vote.

It continues, urging constituents to push their senators to confirm Kavanaugh. "Your right to self-defense depends on this vote," the narrator says.

The NRA's campaign highlights an increasingly heated — and partisan — fight over Kavanaugh's nomination. On Wednesday, just one day after the NRA ad campaign launch, Planned Parenthood and its coalition of progressive advocacy groups announced a six-figure ad campaign with nationwide spots, as well as targeted TV ads in — you guessed it — Maine and Alaska.

The NRA spent $30 million to support President Trump's campaign in the 2016 election. That contribution, and specifically whether it was Russian money, has recently come under scrutiny. Earlier this month, in a lawsuit against New York Gov. Andrew Cuomo, the organization claimed it is in deep financial trouble due to New York state's "blacklisting campaign." The NRA claimed to have lost its insurance and that it may soon have to shut down its video streaming service and magazines. And yet despite the reported financial struggle, the gun lobby is shelling out upwards of $1 million to support Kavanaugh's confirmation.

Among the NRA's reasons for supporting Kavanaugh are that he "rejected a registration requirement for all firearms," and that he "rejected a ban on commonly-owned semi-automatic rifles." Both refer to his dissent in Heller v. District of Columbia in 2011 when he served as a judge on the D.C. circuit. The decision upheld a registration requirement for firearms, and a ban on semi-automatic rifles. In his dissent, Kavanaugh called both measures "unconstitutional."

"The NRA strongly supports Judge Brett Kavanaugh’s confirmation to the U.S. Supreme Court because he will protect our constitutional right to keep and bear arms," said Chris W. Cox, executive director of the NRA's Institute for Legislative Action. "It’s critical that all pro-Second Amendment voters urge their senators to confirm Judge Kavanaugh."

Gun control activist groups like Moms Demand Action have criticized the NRA's support of Kavanaugh. "It’s no surprise the NRA is going all-in for Judge Brett Kavanaugh, given his extreme outlier approach to the Second Amendment that would put in jeopardy the full range of gun safety laws. We will continue to oppose this nomination," Moms Demand Action tweeted Tuesday.

The Senate judiciary committee is expected to start hearings on Kavanaugh's nomination in September.