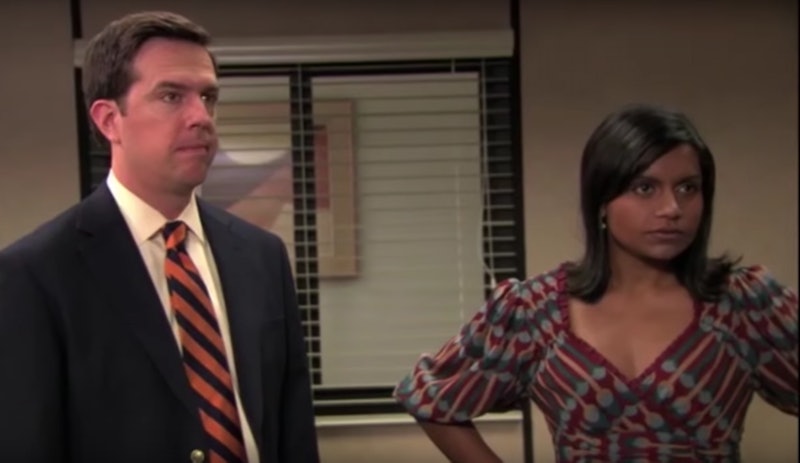 Loyal fans have been committed to shipping The Office's Kelly and Ryan for a long time. The show coming to an end nearly six years ago hasn't changed that. But now, there's a new theory that Kelly and Andy were actually meant to be together and although it's wild, it's not totally unfathomable given the evidence. Over the weekend, The Take shared very thorough research backing up the theory in a video called "Kelly and Andy A Love Story Never Told." The 17-minute video provides "the case for Kandy, a missed connection" and it it'll cause fans to view these characters and all their interactions in a whole new way.

The video, making the case for love between Mindy Kaling and Ed Helms' characters, explains why they are “two of the most compatible Dunder Mifflin employees." It starts from the very beginning, when Andy moved to Scranton. A scene shows him on the prowl for love (well, more like a fling) and Kelly is actually the first to catch his eye, even if he does say she seems like "a good romp in the sack." But, Jim (John Krasinski) steers Andy away from Kelly and he moves on to other prospects.

The video highlights that since then, both characters had on-again-off-again flames, mostly with Ryan and Erin, respectively. So, they never really had a chance to link up. Still, over the years, "there's a spark."

For example, Kelly accidentally gets the wrong Valentine from Andy saying things like, "You brighten my day with the sound of your voice," and she wasn't mad at it. "I guess Andy likes me. I never thought of him in that way," she says, optimistically. "I guess in most romantic comedies, the guy you're supposed to be with is the one you never thought of in that way." Thus, each may have imagined a romance but never really pursued it.

Also, while making the music video for "Male Prima Donna," Kelly replaces Ryan with Andy and Ryan isn't pleased. "You're really gonna make out with this guy?" Ryan irritably asks her. "You really think you can replicate the chemistry you and I have?" Even he was onto something.

Throughout the show, viewers also saw how many common interests Kelly and Andy actually had. For one, they unabashedly embraced pop culture (specifically things like Pretty Woman and Beyonce) and loved being the center of attention when breaking it down on the dance floor. They've even both auditioned for reality TV shows. Not to mention, they're both super extra when it comes to love and extravagant romantic gestures.

Fans on YouTube are welcoming this theory with open arms. Some were understandably a little reluctant at first. "When I FIRST saw the title, I [thought] your theory was kind of far fetched, but after watching the whole video, hmm....you maybe on to something," one viewer wrote. Another admitted, "Damn. This video really convinced me that they belong together tf I did not expect this﻿."

In fact, viewers are so convinced they're ready to see this romance unfold. "Wow. Never realized the office dropped the ball in this way. I would've like to have seen this play out," someone commented on the video. Another said, "If they ever reboot or do a spin off of the office i want the main story to be about Andy and Kelly getting together now﻿."

When it comes to true love, it's never too late.

More like this
A New 'And Just Like That' Table Read Pic Confirms A Key Character's Return
By Jack Irvin and Grace Wehniainen
24 Years Ago, 'Friends' Dropped Its Most Underrated Ross & Rachel Episode
By Grace Wehniainen
Netflix Reveals First Look At Wednesday In The 'Addams Family' Spinoff Series
By Bustle Editors
The 'Skins' Cast Shared The Reunion We’ve Been Waiting For
By Sophie McEvoy
Get Even More From Bustle — Sign Up For The Newsletter