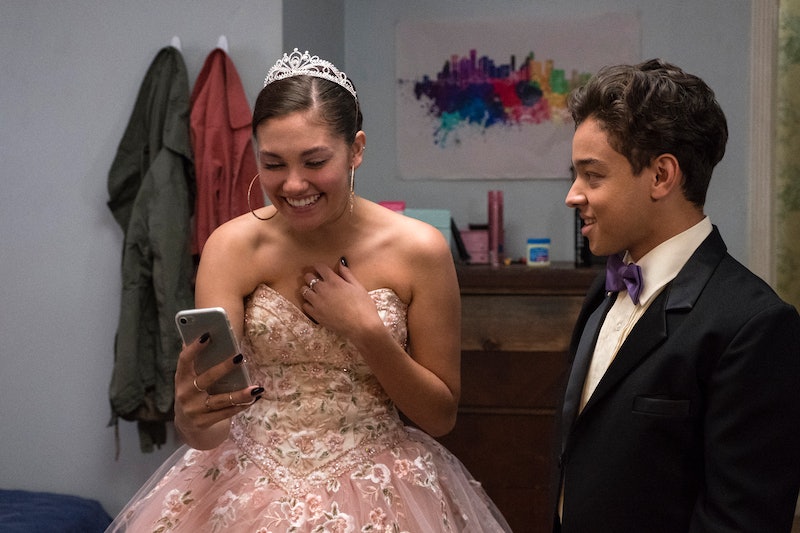 Spoilers ahead for On My Block Season 1. Monse, Jamal, and Cesar watched not just one, but two of their friends get wounded in the Season 1 finale last year. A new On My Block Season 2 clip dropped on Thursday, March 7, titled as the second season's cold open, and it looks like the next chapter of the witty and poignant Netflix dramedy series will immediately answer the question of who survived...and who did not — well, depending on how you interpret it. Season 2 premieres on March 29 on Netflix.

Let's rewind a bit. Season 1 ended with a major cliffhanger — Ruby (played by Jason Genao) and Olivia (Ronni Hawk) were both shot at Olivia's quinceañera, right after Olivia kissed him and returned the affections of his (until then) unrequited crush. The season finale ended right as Ruby and Olivia's lives hung in the balance. And fast forward to 2019: the On My Block Season 2 cold open takes us through how the teens' Freeridge neighborhood has changed — and hasn't — as the song "Glitter" by 070 Shake plays.

By the end of the montage, Ruby is shown lying down on a white pillow with his eyes closed. He might be dressed in a tux. Then he opens his eyes. This isn't his funeral — or is it? It's not completely clear if it's reality or a dream, but either way, it might just be a major hint that Ruby survived the Season 1 finale. As for Olivia, it's unclear.

The proceeding scenes before Ruby opens his eyes show Ruby's family dressed in black and putting a large tray of food into the fridge. A photo falls from the refrigerator: one of Ruby and Olivia together. Ruby's mom (Paula Garces)picks it up and Ruby's abuela (Peggy Blow) comforts her.

Gang activity still greatly impacts Freeridge's population. Jasmine (Jessica Marie Garcia) tears up as she visits a memorial for a young woman who has died (Could it be Olivia?). Monse (Sierra Capri) helps Cesar (Diego Tinoco) get dressed; remember, these two decided to go public with their relationship in the Season 1 finale.

The clip shows Jamal (Brett Gray) staring in awe of the money he found as part of his "treasure hunt" in the finale; he even gives it a big ol' whiff. It looks like he's still relishing his success in finding the cash, but what remains to be seen is what he uses it for — and if he knows about what happened to Ruby and Olivia.

And inquiring fans certainly want to know. In 2018, On My Block was Netflix's top show when it came to watch-time-per-viewing of original series released between Jan. 1 and Nov. 28, according to The Wrap. (That means people tended to marathon a lot of episodes in each sitting.) The series was co-created by Eddie Gonzalez & Jeremy Haft (All Eyez On Me) and Lauren Iungerich (Awkward)

When On My Block Season 2 drops on Netflix on March 29, hopefully Ruby and Olivia's fates will become much clearer — and how it affects Monse, Jamal, and Cesar as they find out if their friend group has changed forever.