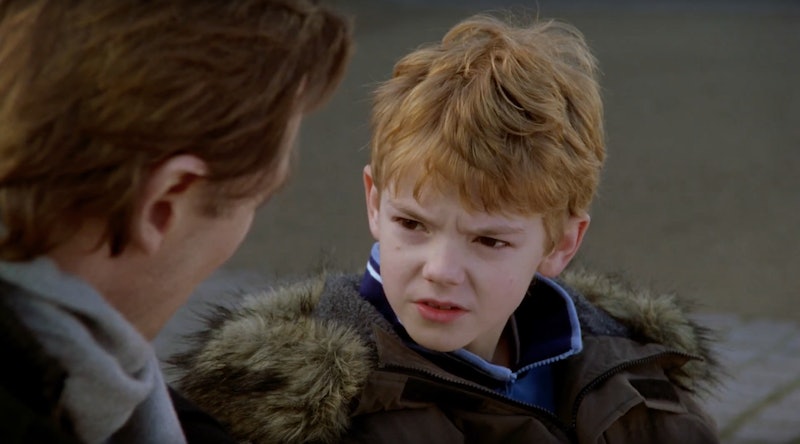 Many fans watch this popular holiday film each year, but this one Love Actually fact might ruin your annual viewing. On Saturday, actor Madeleine Lloyd-Jones shared a piece of Love Actually movie trivia on Twitter, pointing out that Thomas Brodie-Sangster, who played Liam Neeson's precocious son Sam, and Keira Knightley, who played a newlywed named Juliet, are only five years apart in age. Wait, what?

Despite the fact that the actors were both teenagers at the time, Knightley and Brodie Sangster's character's had very different roles in Love Actually. In the film, Liam Neeson plays a widower named Daniel, and Brodie-Sangster appears as his lovesick stepson trying to catch the attention of his crush. In the film, Daniel asks Sam, "Aren't you a little young to be in love?" Meanwhile, Knightley played a newlywed named Juliet, who finds out her husband's best friend Mark, played by Andrew Lincoln, is also in love with her.

Fans of the film reacted to the revelation on Twitter, with one fan tweeting simply, "Whaaaaat" and another user writing, ".....what the ever loving heck." Comedian Ashley Nicole Black admitted the tweet officially ruined Love Actually for her, writing, "So many people, over so many years have tried to ruin this movie for me. You may have succeeded."

Fans of Love Actually pointed out how the bizarre age gap between Knightley and Brodie-Sangster emphasizes ageism in Hollywood. During filming, Andrew Lincoln, who played one of Juliet's love interests, was 30, as per IMDB. Hugh Grant, who played the prime minister, was 16 years older than Martine McCutcheon, who played his love interest, and Colin Firth was also 16 years older than Lucia Moniz, who appeared as his character's housekeeper and eventual fiancé.

Lloyd-Jones' tweet is also not the first time fans of Love Actually have started to see aspects of the film in a different light. Over the years, the nine interlocking stories in Love Actually have come under closer scrutiny, especially Lincoln's character, who shows up at Juliet's house unannounced to profess his love. In 2017, Lincoln discussed his Love Actually character, calling him a "weird stalker guy" who is "obsessively in love and unable to express it so well" in an interview with Entertainment Weekly.

Fans of Love Actually are likely well aware of the film's flaws, and still, they return to the movie for other reasons, such as the all-star cast or for early 2000s nostalgia. Brodie-Sangster and Knightley's age difference is shocking, and will definitely change how fans see the movie, but that doesn't means an annual watch isn't still on their calendars.