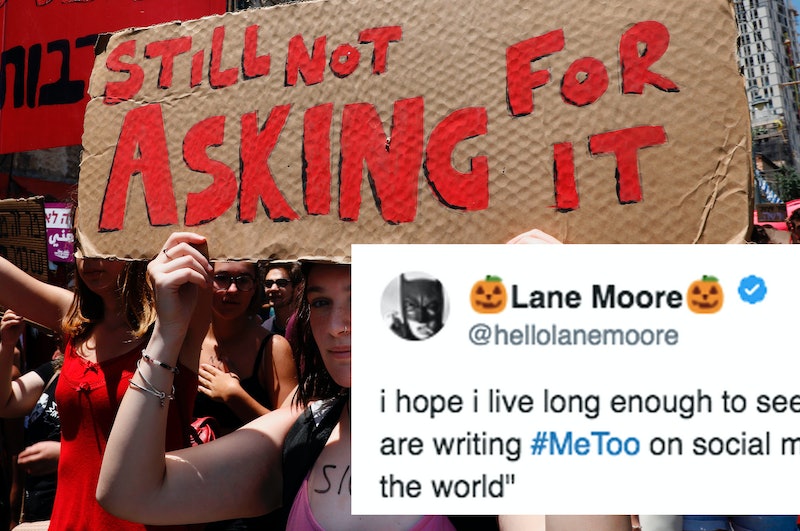 On Sunday, a Twitter hashtag campaign took off, resonating with hundreds of users who gathered to raise awareness about sexual abuse and harassment in everyday life. But there was one particular "Me Too" tweet that stood out. Lane Moore, a stand-up comedian based in New York City, wrote that she hoped for a world where, for women, "Me Too" meant something else entirely.

"I hope I live long enough," Moore wrote, "to see the day when my female friends are writing #MeToo on social media to mean, 'I finally feel safe in the world.'"

If you aren't on Twitter, #MeToo at first glance won't make sense. But after reading a few tweets, you will notice that there is a common thread connecting each tweet and that is sexual misconduct. The hashtag seems to have been initiated by actress Alyssa Milano, who wrote:

[This was] suggested by a friend: "If all the women who have been sexually harassed or assaulted wrote 'Me too' as a status, we might give people a sense of the magnitude of the problem."

It began on Sunday evening and has taken off ever since.

Moore's tweet caught the attention of Twitter users where she aspired for a better future where women weren't hounded by sexual violence. Moore tells Bustle:

The hashtag just breaks my heart. On one level, it's wonderful to hear that this horrifying thing hasn't just happened to one of us, or a few of us, but seemingly to all of us. But that solace quickly turns into an overwhelming feeling of powerlessness and sadness and fear and horror because when will it stop?

I wrote that tweet because I hated that I had to look at the words "me too" and it had to mean something so undeniably terrifying. I don't want to live in a world where I see my friends post such simple commonplace words, but they're used to signify something so shattering.

The comedian has some pragmatic advice as to how sexual violence in the United States can be tackled at a primary educational level. "I think," Moore says, "we need to teach all genders about consent and sexual violence while they're super young, and have more media that re-enforces those same messages."

And she has a point, too. Sexual education in the United States is a remarkably disappointing affair. According to the Guttmacher Institute, a reproductive health research center, 22 states along with the District of Columbia enforce sex and HIV education, while two states enforce only sex education and 12 others "mandate only HIV education." But that's it.

The majority of the sex-educational content is limited to pure biology. The sociological complexities of consent, attraction, violence, and even hygiene are inadequately addressed. In fact, the first state in the United States of America to even actively educate its student populace on a compulsory level about sexual consent was California, and it happened rather stunningly late — in 2016.

I've met far too many men who, when you first sleep with them, resort to violence first and foremost like it's normal. It truly terrifies me. And it shouldn't be the job of women, who are very likely survivors of sexual violence already, to have to educate men and specifically ask them to not be violent with them.

Such educative measures, like the one taking place in California, are sure to have a positive and humane impact on the young people receiving these lessons. Perhaps with the help of sounder and more wholesome structural efforts on educational and social levels, America's sexual abuse dilemma can be ameliorated. Just like Moore, one can hope.