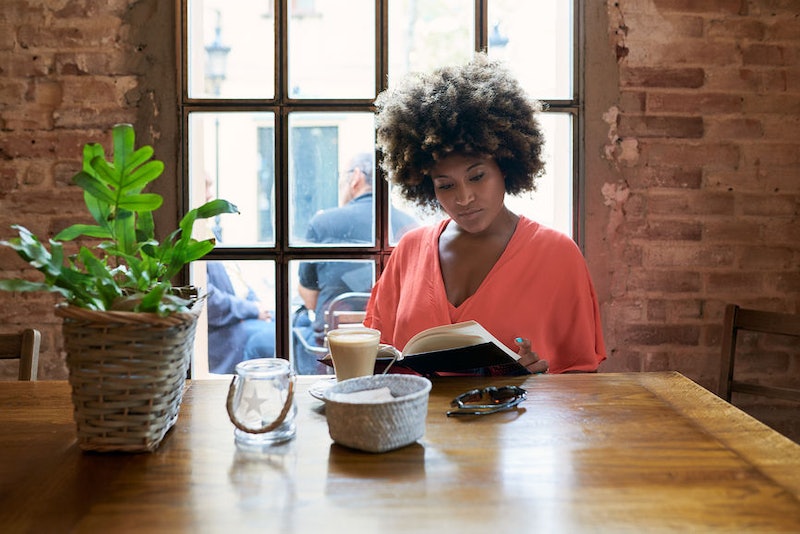 There is a scene at the very beginning of Jana Casale's new book The Girl Who Never Read Noam Chomsky in which the heroine, Leda, attempts to flirt with a cute guy at a coffee shop. It's at once so cringe-worthy and so familiar that I actually put my hands over my eyes while reading it. Casale writes:

"She hoped he'd come over and say something charming or witty, as she imagine a man with such nice glasses might. She cleared her throat to get his attention, but he didn't look up from his book. She got her phone out of her bag as noisily as possible and then sighed loudly, but nothing. After waiting a bit longer, she got up and walked past his table, headed for the napkins. She took three. He didn't notice her."

Leda finally finds the guts to go up to this guy, and she uses the classic opening line, "What are you reading?" The answer turns out to be Noam Chomsky's American Power and the New Mandarins. But her boldness doesn't lead to an illuminating literary conversation or love affair, and instead Leda slinks away from a stilted and awkward encounter and pretends to get a phone call so she can leave the cafe. It is the last time she will ever see the guy, "the future BU graduate," as Casale writes. And yet, a few weeks later, Leda still finds herself picking up a pricey edition of Chomsky's Problems of Knowledge and Freedom at a local rare bookstore.

Readers are never told exactly what's going through Leda's mind when she boys the book except that, as Casale writes, "She didn't think of the boy or the napkins, but she did think of Noam Chomsky as the book cover grew sweaty in her palms." And, of course, readers know from the title that Leda never does read that copy of Chomsky's book. But it was this one short scene that got me thinking about my own reading habits in ways I never have before, and made me wonder just why it is that I'm fascinated with the reading habits of others.

If I look back on my own random book buying habits of the last 10 years, there are more than a few times I pulled a Leda. Yes, there was the time I picked up a copy of Catch-22 because the guy I had a major crush on had taken to carrying around a battered copy — never mind that he, much like Leda, never actually read it and claimed only a few weeks later that he was "tired of pretending to be a person who reads." But even beyond that I've fallen into the same, admittedly fun, book-snooping rabbit holes that so many of people have, picking up a book my favorite celebrity recommended or craning my neck to see the cover of the book that girl with the perfect shade of red lipstick is reading so I can look it up on Goodreads. It just takes a quick look at the popularity of Subway Book Review and Hot Dudes Reading and even the New York Times By the Book column to see that this isn't exactly a new trend.

So, why do we care so much what other people are reading? I never thought of it this way before reading Casale's book, but for many of us, I think a lot of it has to do with aspiration. Did Leda have some hope of impressing the coffee shop guy if she ever ran into him again? Maybe. But I think there is so much more to it than that. Because it wasn't the book itself that mattered necessarily, but how Leda felt when she made that decision to walk up to the man reading it. Casale writes:

"In an unprecedented strike of confidence, she decided to walk up to him. It was impulsive and decisive. If you'd asked her then, she may have said her hair always looked nice and that she didn't need to run her fingers through it at all."

For Leda, being the kind of woman who reads Noam Chomsky might mean that she is the kind of woman who always feels self-assured, who never has to stop at a mirror to see what her hair is doing. For some of us reading books off of Lin-Manuel Miranda's summer reading list might make us feel like we're capable of his particular brand of magic: impeccable taste, non-stop work ethic, genius-level talent. Reading the same book as the super-stylish girl on the Brooklyn-bound F train? You can put together a perfectly chic, slightly disheveled outfit, too! Picking up the same book as the guy who rejected you? What makes him so impressive? Look, you're reading the same book and it's not even all that great!

This is the nature of the sort of unseen sheen of fantasy around buying books we see other people read. Because sure, when you pick up a book for yourself it's because you're you — you know who you are, you know what you like, and you know what you enjoy reading. But to randomly pick up the book of an intriguing stranger? If it's true what they say, and you are what you read, well...today you can be anyone. You could even, just maybe, become the ideal version of you that you've always wanted to be. And that's pretty exciting, isn't it?