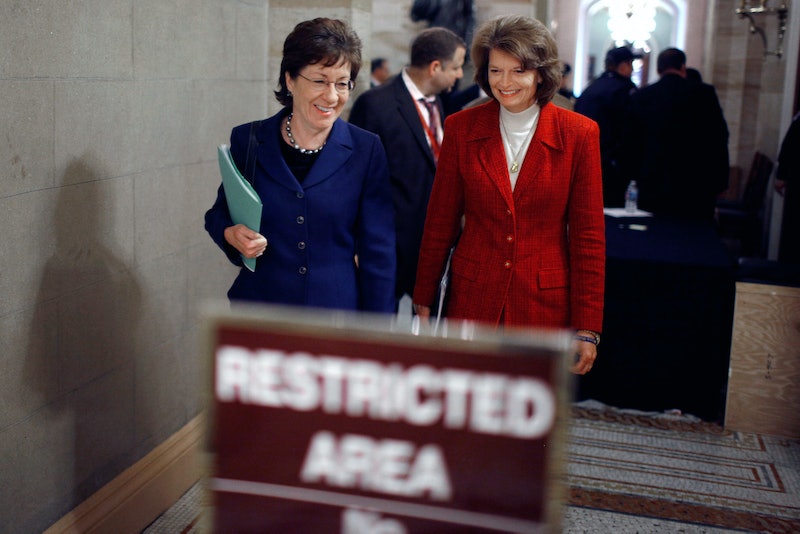 On Monday, the GOP's efforts to repeal and replace the Affordable Care Act fell apart in the face of unified opposition from congressional Democrats and dissension from a small group of Republicans. And less than 24 hours later, Senate Majority Leader Mitch McConnell's subsequent plan to pass a full, delayed repeal without an immediate replacement also fell through, leaving the party without a clear legislative solution. And when it came down to it, it was Republican women who figured centrally in the plan's defeat — and one tweet showed Republican women's role in the health care fail.

It's a particularly notable outcome because of how the GOP neglected to include any of its women senators in the original working group that was charged with putting together the bill. The group, composed of 12 Republican senators, all men, ultimately produced a bill that would have cut Medicaid funding by more than $800 billion, stripped Obamacare's essential health benefits, defunded Planned Parenthood for one year, and caused more than 20 million people to lose health insurance over the next decade.

The GOP Senate majority includes just five women out of 52, three of whom ultimately bucked their party and opposed the bill ― Lisa Murkowski of Alaska, Susan Collins of Maine, and Shelley Moore Capito of West Virginia.

As this tweet from Adam Best notes, the bill was opposed by a majority of Republican women in the Senate, and that represents a decisive margin. Murkowski and Collins made it clear all throughout the legislative process that they didn't intend to vote for any bill that defunded Planned Parenthood, making them rare outliers within their party. By and large, the Republicans are hostile to the women's health organization.

Capito, on the other hand, voiced heavy reservations about voting for the bill after the Congressional Budget Office's score revealed the extent of the impact it would have on Medicaid recipients. Medicaid is particularly crucial to the people of West Virginia, where poverty rates far outpace the national average ― approximately three out of ten West Virginians rely on Medicaid, according to ABC News.

While the three women were not the only Republicans to ultimately come out against the bill ― Mike Lee of Utah and Jerry Moran of Kansas announced their opposition on Monday, which finally ended McConnell's efforts ― their three-member voting bloc would have theoretically been sufficient on its own to stop the bill. The GOP holds 52 seats in the Senate, meaning that they can only afford to lose two votes at most (in the event of a tie, Vice President Mike Pence would cast the deciding vote).

But the women also quashed Republicans' hopes to repeal Obamacare. When it was clear the health care bill was dead, there was talk of a vote to just repeal Obamacare and replace it later. The three senators said they would not vote in favor of that.

All in all, the tweet draws attention to a compelling fact that the GOP ought to reflect on. It's a clear demonstration of the price of leaving women completely out of some of the most sensitive legislative negotiations.