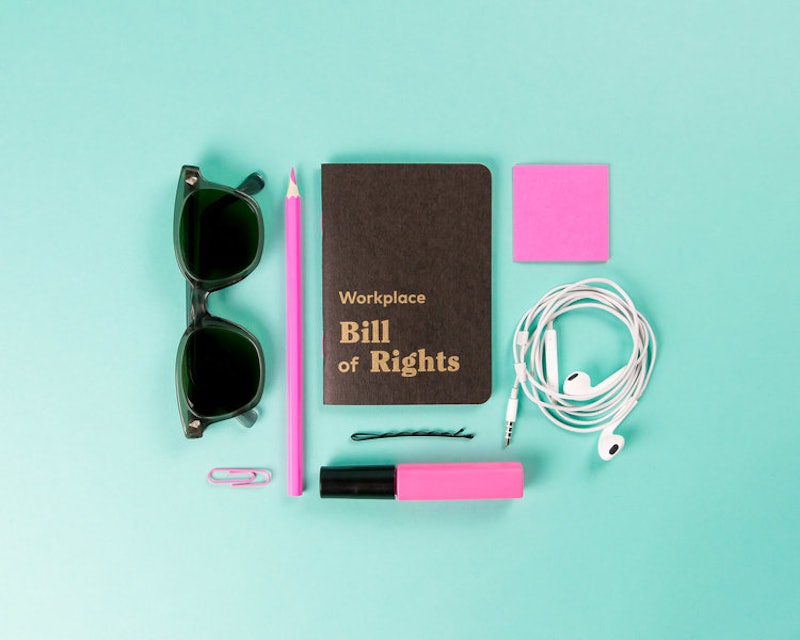 It's hard out there for women in the workforce. We already make just 80 cents to every dollar compared to our male counterparts, a statistic that only gets worse when you factor a woman's race into the equation. Compound a frequently discriminatory reality in the workplace with the current administration's track record on women's issues, and it seems as though you're stuck between a rock and a hard place. Thankfully, Ladies Get Paid created a Workplace Bill of Rights to help women advocate for themselves financially — be it on the job, in a salary negotiation, or wherever they may need it.

Ladies Get Paid is an organization that wants women to "get ahead, get paid, and have our work taken seriously." Ashley Louise, head of policy for the group, tells Bustle that the idea behind the accompanying Workplace Bill of Rights was born out of the fear that the group's efforts would be stonewalled following the 2016 presidential election.

"We held an emergency town hall at Tumblr HQ on November 30, 2016," Louise tells Bustle via email. "Many of our members were concerned that the progress we'd been making towards women's equality, particularly economically and in the workplace, would be slowed or completely stopped without a strong advocate in the White House."

The town hall brought Ladies Get Paid Founder Claire Wasserman and Alessandra Biaggi, Deputy National Operations Director at Hillary for America, together for a conversation. They discussed what women can do as citizens to continue making progress despite setbacks.

"We then we broke into smaller groups to determine what our shared values were, answering the question: 'What can the government and our workplaces do to help us thrive?'" Louise explains to Bustle. "We came back together and shared, compiling everything into what is now the Workplace Bill of Rights."

The Workplace Bill of Rights, described as a "manifesto" of the 100 women present at that town hall, is designed to help give women a voice.

In her email to Bustle, Louise says this is particularly necessary in Trump's America: "The Workplace Bill of Rights is a reminder of the need to safeguard our values. Women currently have so few seats at the table in our government that it's critically important we're persistent about raising our voices from the outside. We've already seen many assaults on women's rights from the current administration, like the suspension of military child care programs and fights against equal pay."

Ultimately, Ladies Get Paid hopes that the Bill of Rights will serve as a reminder that women are not alone, regardless of where a woman is in her career or her particular industry: "We hope that the women will carry the Bill of Rights with them, bring it to meetings, review it before their next salary negotiation, gift it to a girlfriend. It's a reminder that whatever job you have, wherever you work, there is an army of women behind you."

You can purchase it here. The Workplace Bill Of Rights is designed by Meg Lewis and printed by Scout Books.