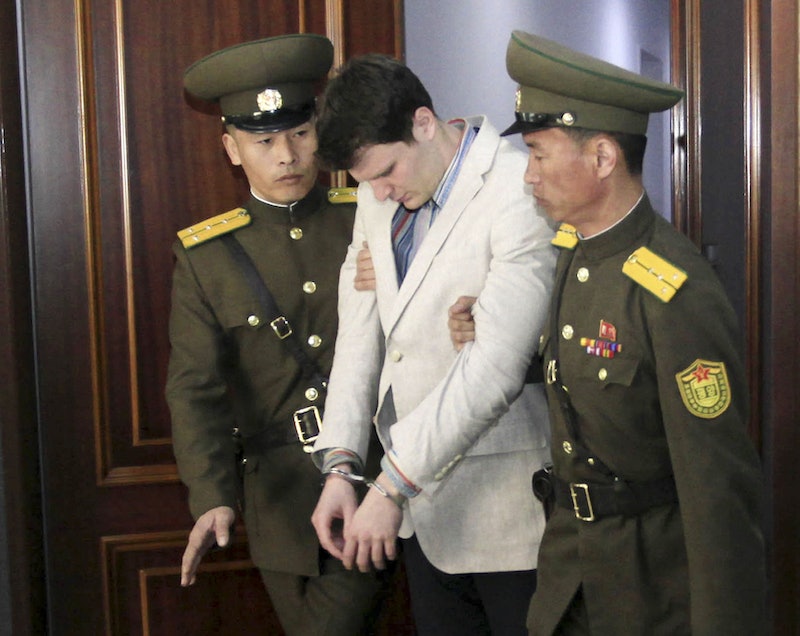 After being detained in North Korea for 17 months, Otto Warmbier returned home to Ohio on Tuesday in a coma. Doctors at the University of Cincinnati Medical Center said that he suffered extensive brain damage and there are no signs of botulism, as North Korean officials claimed.

The 22-year-old University of Virginia student was detained in an airport on his way home after a five-day study abroad trip. North Korean officials claimed to have a security tape of him stealing a banner in his hotel, which he later publicly admitted to. He was charged with and found guilty of "hostile acts" against the country, leading to a sentence of 15 years of hard labor. This was in March 2016, the last time he was seen in public.

Warmbier's parents said in a statement that they heard about their son's coma just one week before his release, stating that their son was "brutalized and terrorized by the pariah regime in North Korea." His father Fred Warmbier later gave a press conference and added that “Otto was held as a war criminal.” They were told by North Korean officials that their son came down with botulism soon after the trial, and that he was given a sleeping pill.

According to the Centers for Disease Control and Prevention, botulism is caused by the botulinum toxin, made from certain common bacteria in only certain conditions, such as improperly home-canned, preserved, or fermented food. I can also be brought on by too high a dosage of Botox, which uses the toxin to smooth skin or treat migraines. Botulism is especially dangerous because it causes paralysis and can eventually paralyze the muscles necessary for breathing. But a person with botulism can be treated with an antitoxin if seen right away.

Warmbier's family doesn't buy North Korea's explanation for his coma. His father said, "Even if you believe their explanation of botulism and a sleeping pill causing a coma — and we don't — there is no excuse for any civilized nation to have kept his condition a secret and denied him top-notch medical care for so long."

Doctors at the University of Cincinnati Medical Center seem to agree with him, though they do not speculate as to what caused his coma. Given that they are unsure of the type of care he received in North Korea, it is unsurprising that they cannot draw definite conclusions.

What doctors do know is that Warmbier shows no current signs of botulism, and instead has extensive brain damage. When Warmbier arrived, he came with no records except two brain scans, dated April and July 2016. Dr. Daniel Kanter, professor of neurology and director of the Neurocritical Care Program at UC Medical Center, said that even those early scans show brain tissue deterioration. Rather than indicating some sort of external trauma, Kanter said that the brain injury is indicative of cardiopulmonary arrest, "where the blood supply to brain is inadequate for a period of time, resulting in the death of brain tissue."

Kanter also said that Warmbier has spontaneous eye-opening and blinking, but does not show signs that he understands language or is aware of his surroundings. A neurointensive care specialist on Warmbier's medical team, Brandon Foreman, said that doctors don't believe that Warmbier has "any conscious awareness." At the family's request, doctors have not discussed his prognosis or speculated about his recovery.

While little is clear for Otto Warmbier, his family is keeping him close and hoping for his recovery. His father said that they are trying to make him comfortable.