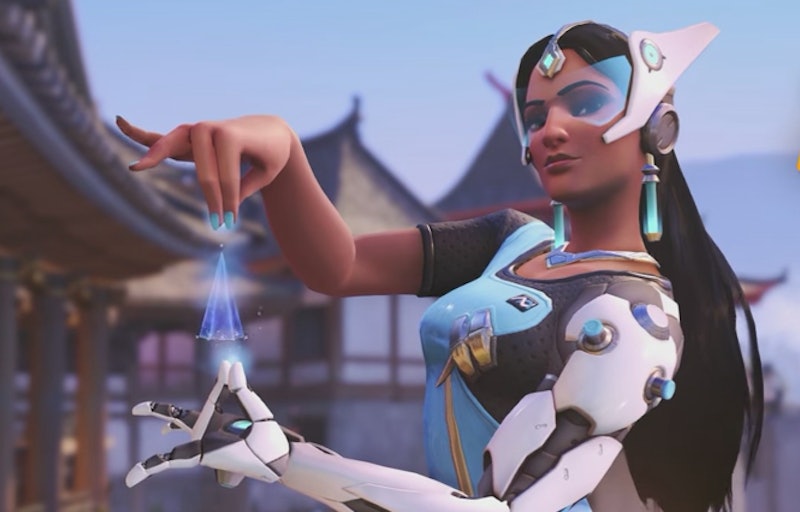 If you're a fan of video games and/or a fan of representation of diverse backgrounds in gaming, this is news you might be pretty excited about. In a response to a fan this week, Jeff Kaplan of Blizzard confirmed "Overwatch"s Symmetra is on the autism spectrum, establishing as canon a theory that many in the game's fan community had been speculating about since the release of her origin story comic in May of last year.

If you're not familiar with "Overwatch," it's a mega-popular competitive online game, in which teams of six players face off in strategic (or, as the case may be for some, not-so-strategic) combat. First released in 2016, the game has been praised for its representation, boasting a roster of playable heroes that cross lines of genders, race, and sexual orientation. Back in December, a Blizzard-produced comic about the game's cover star Tracer confirmed that she's a lesbian, and the game's creative team (headed by Kaplan, its director) have teased that there are more LGBTQ characters yet to be revealed.

The fourth entry of the game's comic series tells the origin story of Symmetra, an Indian advanced tech prodigy who controls the battlefield through the use of energy shields and laser-firing drones. In it, she has a line about people asking where she fit on the spectrum.

This led many fans of the game to speculate whether Symmetra was, in fact, autistic. And according to Kaplan, that's the truth.

Here's what Kaplan wrote back to the fan, who posted the letter to Tumblr (it's authenticity has since been confirmed by Blizzard, according to Polygon):

I'm glad you asked about Symmetra. It was very astute of you to notice that she mentioned the spectrum in our comic. Symmetra is autistic. She is one of our most beloved heroes and we think she does a great job of representing just how awesome someone with autism can be.

With greater representation, of course, comes the potential for more people to object to aspects of characterization. As James Chen noted for e-sports and competitive gaming website PVP Live, the confirmation that Symmetra is autistic raises fair areas to scrutinize and critique how Blizzard handles her character going forward, because casual tokenism is not the same as fully-fleshed representation.

That's complicated by the fact that the game itself has a laser-like focus on team-oriented combat, without anything in the way of in-game plot or story. All of that background information comes through things like the "Overwatch" comics, which means Symmetra being on the spectrum is entirely unspoken in an in-game sense.

For the time being, however, early reception to the news seems mostly positive. And it's entirely likely that this isn't the last time Blizzard will draw the attention of the gaming world with an announcement like this ― back in November, the game's lead writer Michael Chu publicly revealed that mutliple "Overwatch" characters are LGBTQ, and thus far the only thing canonized is Tracer's orientation. Suffice it to say, there are probably going to be more reveals like this in the future, upping representation in one of the most popular competitive multiplayer games out there right now.