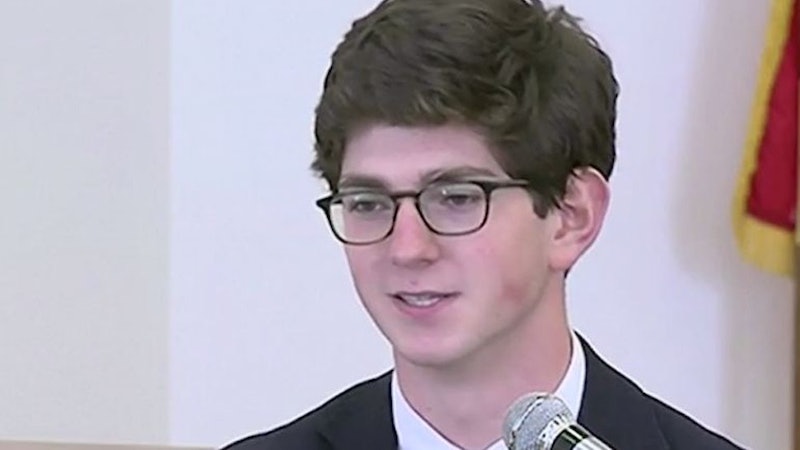 It's rare that someone accused of rape or sexual assault actually ends up behind bars because of that accusation, which is one of the reasons why victims are often hesitant to report their assaults, according to RAINN. One case that began in 2014, however, has ended up sending the accused assailant to jail. Owen Labrie, who was convicted of sexually assaulting a 15 year-old girl on a prep school campus, has just reported to New Hampshire's Merrimack County correctional facility to serve nine months in prison.

Labrie was 18 and a student at St. Paul’s School when he assaulted Chessy Prout, who was 15 at the time, according to The Boston Herald. While courts acquitted him of a rape charge and he denied the allegations, he was convicted on a charge of misdemeanor sexual assault and a separate charge related to using a computer to solicit sex with a minor.

As The Boston Herald wrote, Labrie was originally sentenced to a year in prison, but he hadn't yet served it as the appeals process in his case went on. In 2016, The Boston Globe wrote that Labrie had to spend just over two months behind bars because he violated the terms on which he been allowed to remain out of jail.

Earlier in December, then, The Globe reported that Labrie motioned to shorten his jail time, with his lawyer arguing that “incarceration of Mr. Labrie at this point serves no purpose" and that Labrie had “essentially been under house arrest for over two years.” According to The Globe, though, Superior Court Judge Larry M. Smukler denied this request and ordered that Labrie appear out the Merrimack County correctional facility on the morning of Dec. 26 to serve out the remaining 10 months of his sentence.

"Today, the perpetrator who sexually assaulted our then 15-year-old daughter will finally be held accountable for his crime and sent to jail to serve his sentence," said the survivor's father, Alex Prout, in a statement, according to ABC News. "To date, he has shown no remorse nor accepted any responsibility for his actions. We hope he never sexually assaults another person in the future."

Chessy Prout also commented on the judges order for Labrie to serve out the rest of his time, saying that the ruling was “important because it shows survivors that people are listening, even if it takes several years for a single case to be resolved," according to The Globe.

After serving out his sentence, Labrie will still be saddled with a lifelong listing on the sex offender registry as a result of his felony conviction, according to The Daily Beast. St. Paul's School will also be subject to five years of monitoring by an independent compliance overseer, to make sure that the school stays in line with guidelines to prevent sexual misconduct.

Alex Prout's statement also thanked the prosecutors, police, and other professionals for "bringing the perpetrator to justice and helped shine a light on the institutional complicity of St. Paul’s School," according to The Globe.

“We hope this serves as a wake up call to perpetrators and the institutions that enable rape culture," Prout wrote.