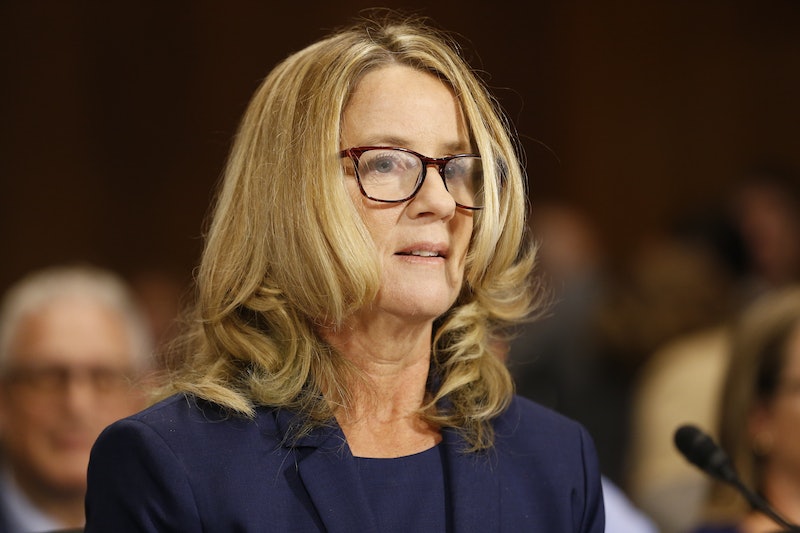 Dr. Christine Blasey Ford and Brett Kavanaugh's hearings are occurring in the shadow of Anita Hill's testimony 27 years ago. In 1991, many criticized the fact that an entirely white and male Senate Judiciary Committee was demanding a young black woman defend her credibility. Knowing that the parallels between Hill and Ford's cases are easy to draw, the committee has tried to avoid problematic optics this time around — but it may still face criticism, demonstrated in part by a photo from Ford's hearing that shows what she's seeing as she testifies.

The image was taken from behind Ford and shows a line of stoney-faced white male senators staring at her. "This is what Christine Blasey Ford is looking at as she describes her sexual assault," New Yorker staff writer Osita Nwanevu captioned the photo.

The current 21-person Senate Judiciary Committee has four female members, all of whom are Democrats, meaning that 81 percent of the committee is male. The committee has never had a female Republican member. A slightly smaller percentage of the Senate at large — 77 percent — is male. There are also two black senators in the committee, Democrats Cory Booker and Kamala Harris, but they, like the women on the committee, were not in the picture taken by Nwanevu.

During Hill's 1991 hearing, the committee was composed entirely of white men. The GOP senators currently on the committee chose a female prosector to question Ford, which many have speculated is an attempt to make the gender imbalance at the hearing slightly less stark.

On Tuesday, Republican Sen. Mitch McConnell, who is not on the committee, announced that the GOP had "hired a female assistant to go on staff and to ask these questions in a respectful and professional way." Mitchell's name was released shortly afterward.

Many criticized the GOP's handling of the hearing proceedings on Thursday. "The fear Republicans had about questioning Ford themselves was that it would be bad optics for a panel of men to try to discredit a sexual assault survivor on national television," Vox founder Ezra Klein tweeted. "Bringing in an outside professional to do it on their behalf is not, so far, looking better."

"Senate Republicans concocted the 'female assistant' idea to obscure their own awfulness," tweeted journalist Brian Beutler, "but it was a always a superficial modification to a process — a process they constructed — that was rotten at it's foundation. Of course it looks awful."

In 1991, it was not only the composition of the Senate Judiciary Committee that drew criticism during Hill's hearing but the questions she was asked. Senators repeatedly asked Hill whether she had an ulterior motive in coming forward with accusations of sexual harassment against Clarence Thomas (he denied them). They asked, for example, whether she was a "scorned woman" or whether she had "a martyr complex."

After that 1991 hearing, 1,600 black women took out a full-page ad in The New York Times to express their support for Hill and condemn what they called "the racist and sexist treatment" she had received. This week, 1,600 men bought a similar ad for Ford, who has made it clear that she's received a flood of support — as well as criticism and threats — from people around the country since going public with her allegations.