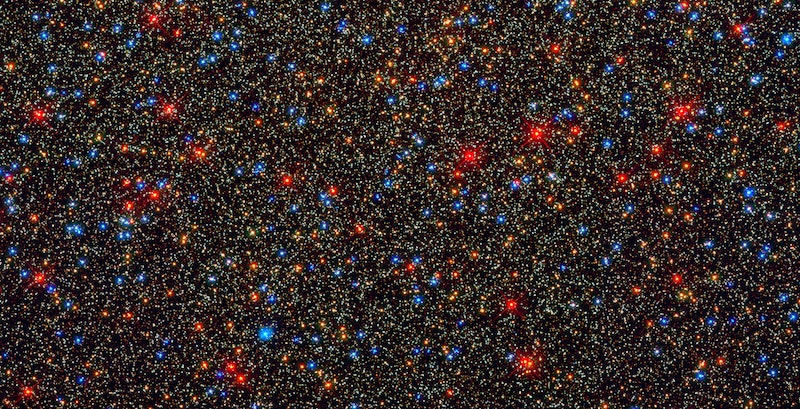 The universe is a big place, and we're constantly developing new ways of looking more deeply into it. When a real sighting eventually comes, it's an exciting moment — and one of these sightings has just been confirmed. Astronomers captured a photo of a brand new planet in the process of formation for the first time ever, both lending greater evidence to the hypothesis on how planets form and raising further questions about the particulars of that process.

The Guardian reported on Monday that scientists at the European Southern Observatory had obtained the image using their Very Large Telescope, which they describe as one of the strongest exoplanet-hunting tools in the world. While the image looks blurry to untrained eyes, it actually shows a bright spot — the newborn planet — moving through the duller flat disc of gas and dust that gathered around the star, PDS70.

“These discs around young stars are the birthplaces of planets, but so far only a handful of observations have detected hints of baby planets in them,” said Miriam Keppler, the team leader behind the impressive discovery, in a statement from the ESO. “The problem is that until now, most of these planet candidates could just have been features in the disc.”

According to CNN, being able to actually capture an image of the new planet for the first time was a real breakthrough that will now enable astronomers to move forward much faster in learning about how planets form.

“Keppler’s results give us a new window onto the complex and poorly-understood early stages of planetary evolution,” said André Müller, the head of another team investigating young planet, in the ESO statement. “We needed to observe a planet in a young star’s disc to really understand the processes behind planet formation.”

According to the ESO's statement, they used SPHERE, a specific element of the Very Large Telescope meant specifically for looking at explanets and at these clouds of dust and gas around stars, where exoplanets form.

"After more than a decade of enormous efforts to build this high-tech machine, now SPHERE enables us to reap the harvest with the discovery of baby planets!" said Thomas Henning, the director of the Max Planck Institute for Astronomy and the head of the two teams, in the ESO statement. Beyond just detecting the still-forming planet, which they've called PDS 70b, SPHERE was also able to learn a few things about it.

According to USA Today, this analysis revealed that the planet is a few times as big as Jupiter, the largest planet in our solar system. It's almost two billion miles away from its host star, which is about as far as Uranus is from the Sun. While the newborn planet is gas giant, like Jupiter or Uranus, it's got a much hotter surface temperature than any planet in our neighborhood. According to the USA Today, its temperature is about 1,832 degrees fahrenheit — just over double the surface temperature of Venus, which is the hottest planet in our solar system.

The teams studying them estimate that both the planet and the star are about 370 light years from Earth, meaning that the point in the planet's development captured in the image happened about 370 years ago — hardly the blink of an eye in terms of the universe. According to the Guardian, the star itself is only about five or six million years ago, so the planet is likely a bit younger. Our Sun, by comparison, is 4.6 billion years old, according to NASA, with the Earth's age estimated at about 4.5 billion years. There's a lot still to learn from this pair of objects, though, and scientists will watch the planet as it slowly makes its 120-year orbit around its planet, according to the Guardian. As the years go by, it'll teach us more and more about what happened here 4.5 billion years ago.