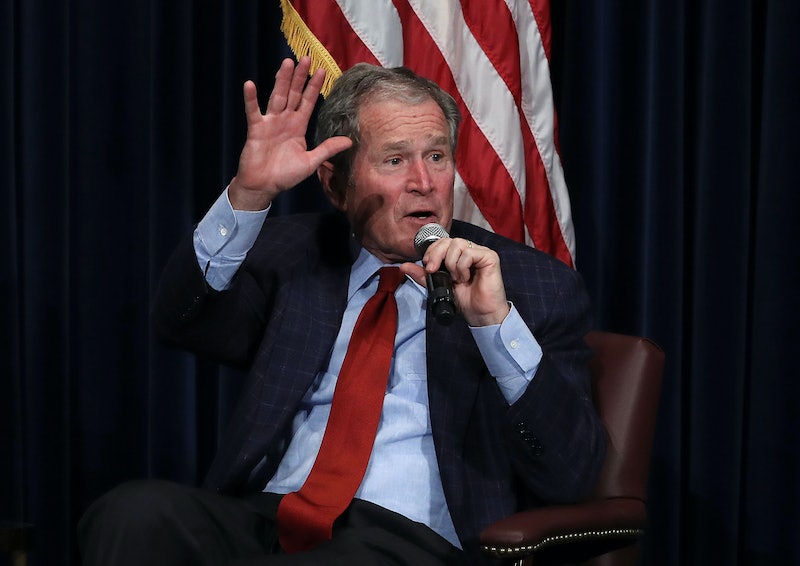 Many federal employees have been working without pay since the partial government shutdown began last month, and this week, former President George W. Bush called on lawmakers to take action. According to a photo posted to his Instagram account, Bush delivered pizzas to his Secret Service detail on Friday, and urged political leaders to end the shutdown.

"@LauraWBush and I are grateful to our Secret Service personnel and the thousands of Federal employees who are working hard for our country without a paycheck," Bush wrote in the photo's caption. "And we thank our fellow citizens who are supporting them. It’s time for leaders on both sides to put politics aside, come together, and end this shutdown."

According to The Hill, former presidents and first ladies receive lifelong protection from the Secret Service. The government has been partially shut down for nearly a month now — since Dec. 22 — and USA Today reported that it shows no signs of ending soon. Trump is currently embroiled in a battle with Congressional Democrats over the funding he has demanded for his proposed border wall. He has pledged to veto any government funding packages that do not include this funding, causing the government shutdown to stretch on.

On two separate occasions since the shutdown began, Senate Republicans have blocked funding packages passed by the Democratic majority in the House. Senate Majority Mitch McConnell has maintained that he will not take up any legislation until and unless Democrats reach an agreement with Trump on border security, per The Hill.

The tension between Trump and House Democrats further escalated on Wednesday, when House Speaker Nancy Pelosi formally asked Trump to postpone his State of the Union address until after the government shutdown. According to CBS News, Pelosi added that Trump could also submit his thoughts for the address — which is scheduled for Jan. 29 — in writing.

The very next day, Trump responded by grounding a congressional delegation to Belgium and Afghanistan that Pelosi was meant to lead, Politico reported. The delegation planned to meet with NATO leaders in Brussels and with military troops and leaders in Afghanistan.

Bush is not the only person offering food and assistance to federal workers who are going without pay. Many federal employees are turning to food banks around the country to stock their pantries, and in Tennessee, a Syrian refugee is offering free food from his falafel shop to anybody impacted by the government shutdown. According to CNN, hundreds of federal workers — those who have been furloughed and those who have been working without pay — have sought assistance from food banks, even though many of them have never needed to in the past.

Since the government shutdown began, roughly 800,000 workers have been either furloughed or deemed essential, in which case they have had to continue coming to work without receiving a paycheck. Trump has blamed the Democrats for this situation, arguing that they should agree to funding a border wall, but a Reuters/Ipsos poll released earlier this week indicates that 51 percent of U.S. adults blame Trump.