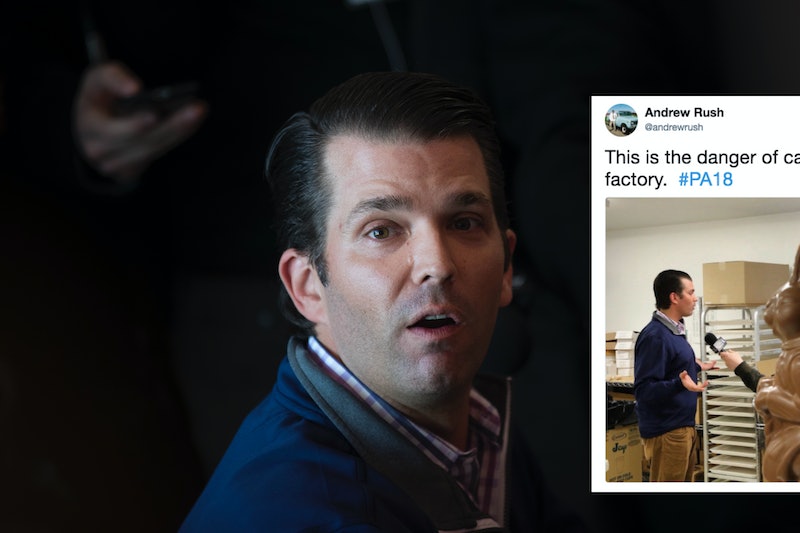 Campaigning for your members of your party is a run-of-the-mill political activity. But when you campaign at a candy factory somewhere in the Rust Belt and a photojournalist takes a photo of you seemingly responding to a life-sized chocolate rabbit with a microphone, well, people will notice. That's what happened when Donald Trump's son, Donald Trump Jr., visited a Pennsylvania candy factory. Twitter users just lost it.

On Monday, Trump Jr. was in Pennsylvania campaigning for Republican House candidate Rick Saccone. The president's son was visiting the state's Sarris Candies, a sweets-manufacturing factory, along with aspiring candidate. Both political figures reportedly talked to factory workers, wore hairnets, took selfies with the people inside the factory, and tried out the sweets. The venue and company, according to ThinkProgress, is owned by avid Trump fans who let Trump Jr. and Saccone in for a campaigning tour.

While Trump Jr. and Saccone may have focused purely on politics, the impression on social media took seemed to be different when Pittsburgh Post Gazette's staff photographer, Andrew Rush, shared a photo of Trump Jr. at the Sarris Ice Cream Parlor. In the photo, it looks like several massive chocolate bunnies are facing Trump's son while one of them is asking him the hard-hitting questions of an intrepid reporter. Rush captioned his photo, "This is the danger of campaigning at a candy factory."

Observers on Twitter interpreted the photo in a myriad of ways. For some, it looked like a scene out of the intense film, Donnie Darko. For others, the photo was absolute proof that our terrifying and large "chocolate bunny overlords" had arrived.

How tall is that bunny? I reckon seven feet tall. At least.

2. The Overlords Are Here

Time to submit to the chocolate bunny gods and their microphones.

For some people, the idea of a possibly seven-feet-tall chocolate bunny asking questions in the presence of other and equally large bunnies wasn't exactly a calming thought.

For others, Rush was "a hero" for snapping this perfect moment.

5. Possible Theory As To What The Bunny May Have Asked

One Twitter user offered a take on what the bunny reporter may have asked Trump Jr.: "Our people have been persecuted every Easter for decades. What will your father do to protect candy bunnies?"

Maybe the conversation took a dark turn. Who knows.

In a world where chocolate bunnies were alive and unnervingly tall, maybe some of them would want to know about this question posed by a Twitter user: "Can you do something about the chocolate lagomorphs who are stealing our journalism jobs?"

If this is a reboot of Donnie Darko, viewers would like the production team and everyone related that they're not happy about it.

Imagine a chocolate bunny asking Trump Jr. if he was mulling over the possibility of a chocolate and egg tariffs. Just imagine.

11. You Missed This Scene

You might have missed this one Donnie Darko scene.

Probably the best pun for this photo.

Your fearless journalism is appreciated.

It takes skill to interposition two objects like that. For that, the internet thanked Rush.

19. What If They Were Sharing Donnie Darko Lines?

20. Give This Guy A Pulitzer

Whether he gets the votes or not, Saccone could get a considerable deal of internet traffic by plastering this image on his campaign website.

Regardless of whether it looks like a deleted Donnie Darko scene or just an aggressive journalist grilling a politician, it's clear that Rush's photo won Twitter Monday.