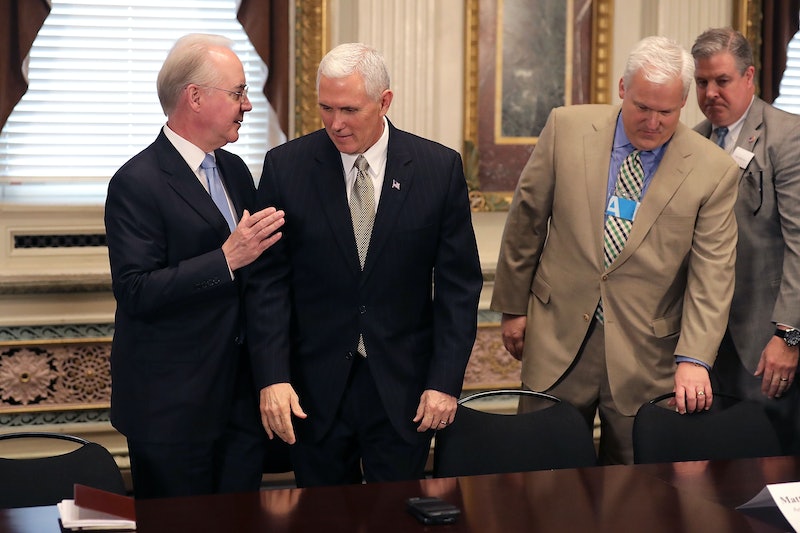 Diversity does not seem to be the Republican party's biggest strength. In a photo tweeted by Mike Pence on Thursday, the vice president said that he "appreciated joining @POTUS for meeting with the freedom caucus again today. This is it. #PassTheBill." But there is one small, tiny, itsy-bitsy problem with that photo: There is not a single woman or person of color shown in the meeting on the American Health Care Act. Instead, it's a photo of white men working on the AHCA, and Twitter is not pleased — for a valid reason.

Had this been a meeting on a bill that only affected older white men (that's unlikely with any bill, FYI), it would not have been an issue to witness a sea of elderly white men congregating. But this is a meeting that will decide the fate of America's access to basic health care, including women's reproductive rights, lower-income Americans' access to healthcare, and much more. The absence of women along with people of color demonstrates how glaringly oblivious the GOP remains to the racial and gendered makeup of America's population.

To put it in simple numbers, that's 25 white men pontificating about healthcare for Americans.

Race and gender have always been unavoidable when it comes to any discussion of American politics but in the past year. Both subjects have been an incredibly critical point of focus for both Democrats and Republicans in terms of winning political support across the country. This is not the first time the Republican Party has been on the receiving end of criticism over the subject of diversity -- or if we were to remain honest, its jarring lack of it.

In 2016, Iowa Rep. Steve King defended the Republican National Convention's lack of diversity in an exchange with Esquire writer Charles Pierce on MSNBC. King said, "I would ask you to go back through history and figure out where are these contributions that have been made by these other categories of people that you are talking about, where did any other subgroup of people contribute more to civilization?"

It may be tempting to write these incidents off as unintentional or simply mistakes, but comments like King's and the lack of presence of minorities and women in the photo Pence tweeted point to GOP's problem with diversity.

In the case of the AHCA, it's a problem that carries devastating consequences for women, people of color, lower-income Americans, and more. And it simply cannot be ignored.