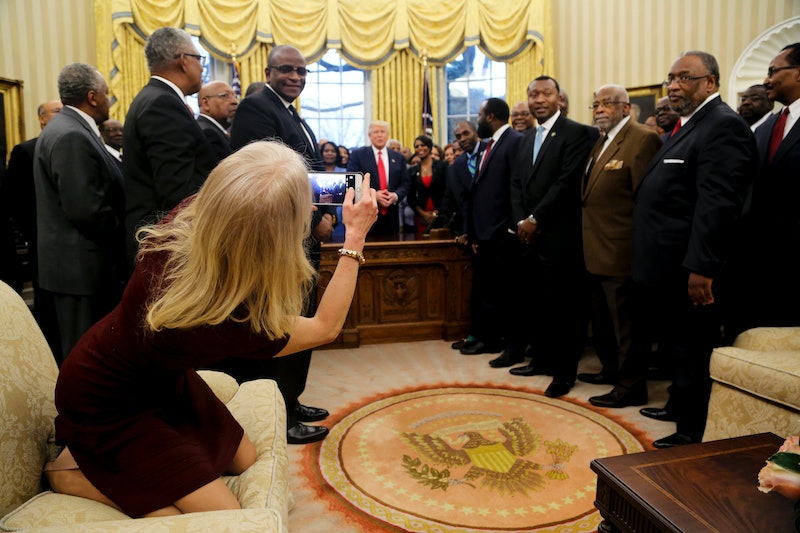 On Monday, Donald Trump met with the presidents and other leaders of historically black colleges and universities at the White House. A photo of Kellyanne Conway on the Oval Office couch is being circulated widely on Twitter — and many people are not happy about it for a variety of reasons. It is important to fully explore these critiques as well as to contextualize the image in order to obtain a better understanding of the situation.

Twitter users seem to be primarily critiquing Conway because as she's kneeling on the couch and checking her phone, it seems as though she's completely ignoring the group of highly venerable historically black college and university leaders in the room. If this is the case, it is obviously egregious, rude, and unacceptable.

However, other photos taken during the event show that Conway knelt on the couch in order to capture a photo of everyone on her cell phone, presumably because doing so allowed her to capture it from a better angle. The photo being shared on Twitter seemingly depicts the moment right after Conway took the photo of everyone, where she could be viewing the shots on her cell phone.

While climbing on a couch in the Oval Office to capture a photo may or may not be acceptable, it does seem pretty clear that Conway did so in order to capture a photo of everyone in the room. At least, you can only hope she wasn't casually checking her phone while Trump met with the HBCU heads.

While most Twitter users are seemingly upset because in the photo Conway appears to be rudely ignoring the very esteemed professionals in the room, others are unhappy with the fact her feet are on the couch. Some users indicate that they believe Conway kneeling on the couch is not "classy," while others believe that her lack of decorum is indicative of privilege.

In my opinion, kneeling on a couch in the Oval Office, particularly after taking a photo, is not an improper act in itself. Calling it "classless," "disgraceful," "vile," as well as a handful of other words and images particularly used to insult women, makes the critique feel sexist, particularly because many users are criticizing the fact that Conway knelt in a dress. If a male staffer had knelt on the couch to capture the photo and subsequently check the outcome, would Twitter have the same response?

Overall, I believe it is important to fully contextualize events and images before critiquing them. While critiques of the Conway photo are certainly valid, the fact that she holds enough privilege to act so casual in a formal environment resonates with me more than others.