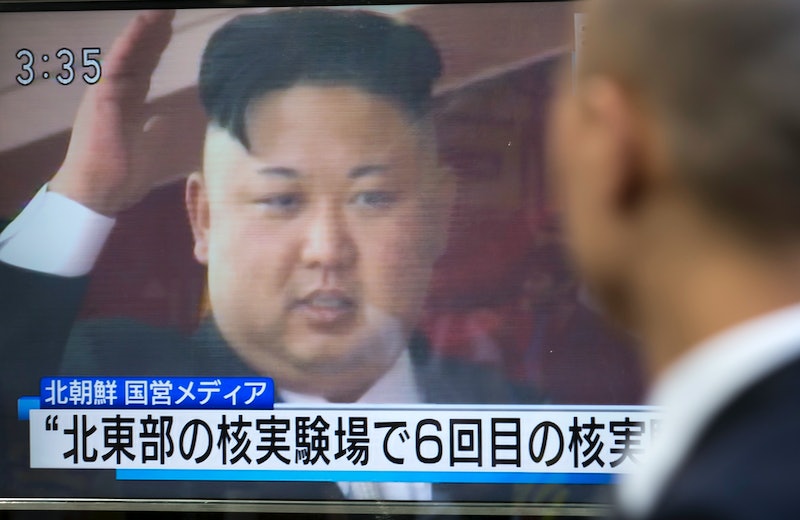 On Monday, North Korea's infamous leader hosted a dinner for senior representatives from South Korea in Pyongyang for the first time since 2011. Indeed, a photo of Kim Jong Un shaking hands with a South Korean delegate seems to epitomize the historic nature of the meeting, which focused on improving North-South relations and potentially opening diplomatic talks between the United States and North Korea.

CNN reported that Kim hosted a dinner meeting for the South Korean delegates at the main building for the Korean Workers' Party in Pyongyang. The meeting reportedly began at 6 p.m. local time and lasted for four hours. North Korea's delegation included Kim, his wife Ri Sol Ju, his sister Kim Yo Jong, and others. The South's 10-person delegation was led by the country's national security chief, Chung Eui-yong. The delegation also delivered a personal letter from South Korea's president, Moon Jae-in.

The aforementioned photograph features Chung and Kim shaking hands — and is symbolic of the unity the meeting was intended to help foster. According to North Korea's news agency, the Korean Central News Agency, during the meeting, "[Kim] made an exchange of in-depth views on the issues for easing the acute military tensions on the Korean Peninsula and activating the versatile dialogue, contact, cooperation and exchange." The outlet also added that North Korea's leader "repeatedly clarified that it is our consistent and principled stand and his firm will to vigorously advance the north-south relations and write a new history of national reunification by the concerted efforts of our nation to be proud of in the world."

Prior to the meeting, officials from South Korea emphasized that their goal for the gathering was to discuss improved Korean relations, to focus on denuclearizing North Korea, and to open diplomatic talks between the United States and South Korea. As Chung told reporters during a press briefing prior to the meeting, the South Korean delegates would seek to "maintain the dialogue and improvement in relations between the South and the North... [and] to denuclearize the Korean peninsula." Moreover, Chung also added that he planned to "hold in-depth discussions on various ways to continue talks between not only the South and the North, but also the North and the United States."

North Korea's news agency reported that, following the meeting, officials from both sides had reached a "satisfactory agreement," though the agency did not expound on what the agreement included. RT reported that a South Korean official also commented on the progress made during the meeting, noting that "there were outcomes. ... The outcomes are not disappointing. We believe the details will be announced after the envoys return to the South."

RT further reported that the delegations will hold additional talks on Tuesday and then the team from the South will head back to Seoul. Soon afterwards, South Korean officials will travel to the United States, where they will brief U.S. officials on the results of their meeting with the North.

Overall, while some progress to deescalate tensions on the Korean peninsula is seemingly being made — as illustrated by the photograph of Kim and Chung — much work certainly still needs to be done, particularly when it comes to opening a dialogue between the United States and North Korea.