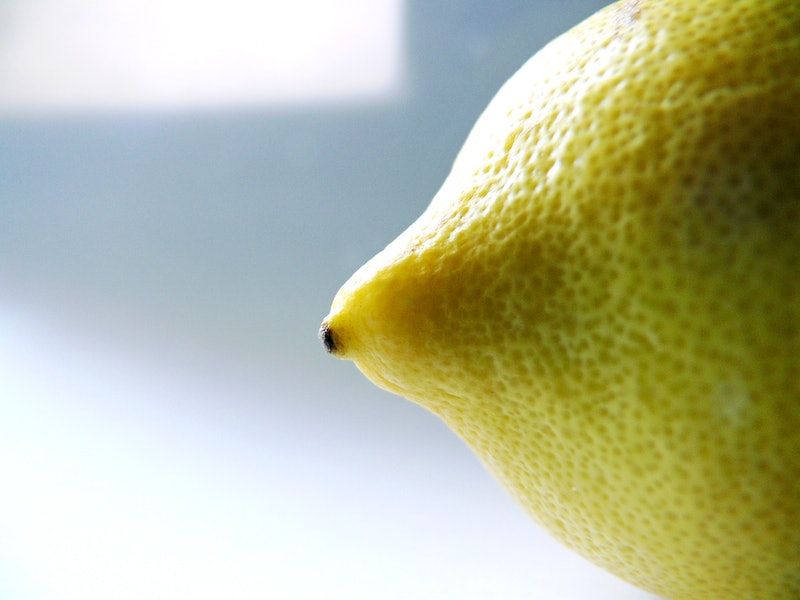 I know, I know: What does a picture of lemons have to do with breast cancer? It seems like a nonsensical pairing at first — but it turns out that the two have more in common than you might think. Consider the fact that one in eight U.S. women will be diagnosed with invasive breast cancer in their lifetime. Doctors recommend regular self-exams, but how do you know what to look for? That's where the lemons come in: The picture in question is going viral, and it’s all thanks to one cancer survivor’s prescient Facebook post.

The image, part of the Worldwide Breast Cancer organization’s Know Your Lemons campaign, could quite possibly save thousands of lives by demonstrating what exactly breast cancer can look and feel like. The general public isn't familiar with many of the symptoms, so designer Corrine Ellsworth Beaumont utilized the citrus fruit to show some of the things people might not even know they should be looking for.

Although it's been around for several months, the lemon diagram started gaining major traction on social media when Erin Smith Chieze posted the image on her Facebook page on Tuesday, Jan. 10. Chieze took to Facebook to tell the story of how a similar image posted by a friend two years prior saved her life. While Chieze no longer could find the image from 2015, she returned the favor by posting the Know Your Lemons image instead. "The lemon image was actually the first photo I saw when I Googled 'What breast cancer looks like meme'," Chieze tells Bustle in an email. "The lemons stood out more, looked sort of like breasts but wouldn’t violate the rules on Facebook about nudity."

The 38-year-old mother and full-time nursing student was inspired to write the powerful post as a response to a game that she had been forwarded. "I have received quite a few private messages about a 'game' going around where you post a heart, then you are secretly supposed to state it is for breast cancer awareness," Chieze wrote in her post. But, she stressed, "We need to give real information, not cute hearts. Without having seen a picture randomly with real information, I wouldn't have known what to look for. Do us a favor, stop playing games with my life and start truly helping people."

Breast cancer awareness isn't just about showing your support online or participating in fundraisers every October; it's also about learning the actual signs and symptoms of the disease. "When I saw an indentation that looked like one of those pictures, I instantly knew I had breast cancer," Chieze wrote in the post. "I tried to feel for a tumor, but my tumor was non palpable." Five days later, she was diagnosed with breast cancer; she learned it was stage 4 the following month. "I knew what breast cancer was," Chieze wrote. "I knew all about self exams, but a picture of what to look for keyed me into knowing I had a terminal disease." Clearly, the post resonated: In less than 24 hours, it garnered hundreds of likes and has been shared over 2,000 times.

The comments on Chieze's post are overwhelmingly positive, thanking her for providing such useful information. Chieze is hopeful that the post will make a difference, and help another woman or man in need. "If you truly want to help people WITH cancer, or those who will GET cancer, share photos like this one," Chieze concluded.

The fact that her personal post has made such an impact on social media has left Chieze with mixed emotions. "If feels odd," Chieze tells Bustle. "I just wanted to write a note to my friends and family, hoping to provide a visual tool similar to what I saw, that just might help someone else. But now knowing that this may reach a much larger audience, I feel grateful that maybe just one person out there will see it, get to their doctor and have the chance of much greater outcomes."

This isn't the first time a viral post has helped people identify the early signs of cancer, either. For example, a post shared on Facebook by Australian woman Kylie Armstrong which included a cropped photo of her breast with three small dimples went viral in February of 2016. After viewing the post, a woman in England subsequently identified similar signs on her own body. The trend of social media posts like those of Chieze and Armstrong are not only helping more and more people spot cancer symptoms, but are also starting a frank and open discussion about breast cancer — something which is sorely needed. Our culture has a tendency to automatically sexualize breasts, which can then get in the way of these kinds of discussions; while obviously breasts can be sexual (and it can be a lot of fun when they are!), they aren't necessarily sexual — and avoiding conversations that could literally save people's lives purely because breasts sometimes appear in a sexual context is, honestly, absurd.

Chieze's resilience is admirable, and her story is an important one people everywhere. "I am still in school, I am still living my life, and I hope that I can make a difference for at least one person out there," she says. "Cancer is a terrible disease that tries to take over everything in your life. It drains your energy, it drains your bank account, it drains those around you, but I am trying my best to not like it drain me of my hope, my happiness, or my desire to help others."

More like this
An Honest Review Of The TikTok-Famous WalkingPad
By Kaitlyn Wylde
Is TikTok’s “Villain Era” Trend Just An Excuse For Bad Behaviour?
By Chanté Joseph
Are Gemini & Cancer Compatible In A Relationship?
By Kristine Fellizar
5 Crystals To Lower Your Anxiety
By Megan McCarty
Get Even More From Bustle — Sign Up For The Newsletter